Yesterday, SK who had come with an unknown bite and went into quite a lot of complications ultimately went home.
She was looking quite cheerful. 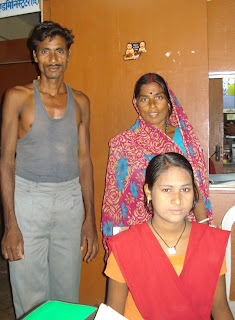 The diagnosis on her discharge summary read -
UNKNOWN BITE RESULTING IN
- DRY GANGRENE OF THE RIGHT LEG FOLLOWING COMPARTMENT SYNDROME,
- ACUTE RENAL FAILURE,
- MYOCARDITIS RESULTING IN PULMONARY EDEMA AND
- SEPTICEMIA.
Her highest level of S.creatinine was 7.8 mg% and we had wished that we could try out peritoneal dialysis.
We are thankful that she pulled through. She was in the ventilator as well as manually bagged by her parents for almost 72 hours.
Now, we made an attempt to identify the culprit. When Seema came to my office before discharge, I decided to give it another try. She clearly told me that she was bit by a 'Khapar Bitcha'. I summoned some of the local staff and tried to figure out the creature. 'It looks like a large lizard and a coarse chameleon' - that was how someone put it.
I figured it is something like a monitor. So, I searched the web and came up with some pictures. Ultimately, when I showed her the wikipedia page about the Bengal monitor, she was absolutely sure. However, I had a problem. I could not find out anywhere that the Bengal monitor was that poisonous. 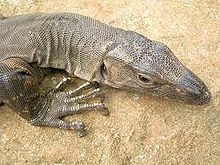 Sometimes I wonder if we had made her more sick by giving her Anti Snake Venom - we did it as her Clotting Time was more than 20 minutes. Or was it a result of septicemia which resulted following the gangrene which set in because of the compartment syndrome.
I look forward for comments regarding the same. Especially from the experts on such bites. Maybe we've found something new that could be reported.
The story about SK would not be complete unless I put in something which we did for her family. If you have read my previous blog about SK, you will understand that her father wanted to take her home to die. We pleaded with him not to and give us a chance to try to heal her. Ultimately, I had to tell the father that we would treat her for free.
Unfortunately, once the father saw that SK was getting better, he had gone and sold a part of his land and got some money. He was ready to pay about 10,000 rupees when the discharge was all made. The total bill had come to about 30,000 rupees. I kept my promise and did not take a rupee.
However, such things are quite burdensome for the institution. We look forward for contributors from well wishers towards SK's treatment.