Shalom had turned 4 on the 29th September. Unfortunately, there were pressing things from the hospital which prevented us from having his birthday party on the same day. 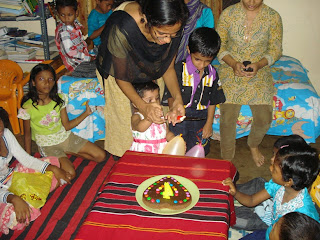 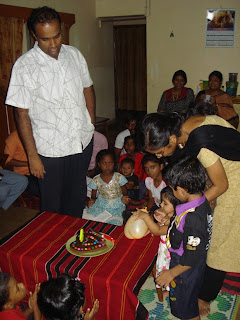 So, we arranged for a party today. We had been discussing for a long time about what we would give for the party. The usual fare in the campus birthdays is either samosas, egg chops, or potato bajjees along with one of the umpteen sweets. More of less, it was predictable and it was quite common to see food being wasted.
There was couple of children who had been sending feelers that they would like to have idlis. So, ultimately we decided on having idlis. For Angel and me, it was going to be a herculean task. My sweet wife was quite up to the task and after quite a lot of planning, did a quite superb execution. By 4 in the evening today, we had 180 idlis – made with a small 2 litre grinder and an idli cooker which made 16 idlis at a time. 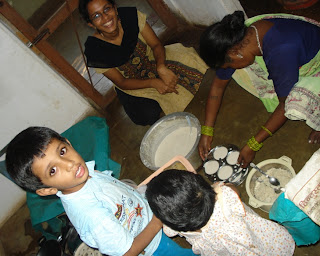 The party went on quite well. Shalom wanted his favorite Gems cake – we had managed a heart shaped cake tray – so it was quite a good sight to the eyes. Along with the idlis, Angel also managed to make about 7 cakes. 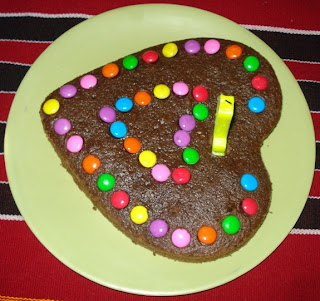 We had about 30 children for the party.  It was quite heartening to see the idlis disappearing so fast. Our next project would be trying out making appam and chicken stew for the children’s Christmas party this year.
Posted by Jeevan at 9:37 PM