Hunger and Tetanus - Yet Again

CD, who has been with us for the last 4 weeks ultimately showed signs of recovery couple of days back. The story of the penury that his family faced and which got to be ultimately addressed made quite a lot of my followers writing back to me. 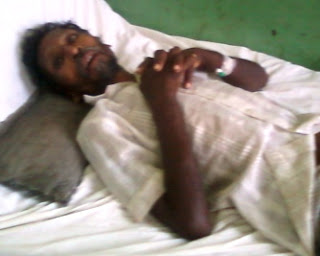 Meanwhile, there was one more tetanus patient, a 7 year old boy, BS who has been having symptoms since the last 8 days and has been on treatment at many places. Dr Shishir who was on duty 3 days back when BS came in diagnosed tetanus and we started off treatment.
Today morning, BS's parents told the nurses that they wanted to take the boy home. The reason, they do not have any money. We had been giving them hospital supply. On arrival, I wrote them a prescription for Injection Tetanus Immunoglobulin which we did not have in the hospital pharmacy. They were asked to buy it from outside.
It was only when they reached one of the pharmacies in Daltonganj, someone told them that the treatment of tetanus could be very expensive. In addition, without our knowledge, the family had not been having food since admission. The father had told one of the nurses initially that they have lot of people whom they knew and they could easily find food.
I confronted the parents. The father started to sob. He told that they have spend quite a lot of money on treatment before they reached NJH. They did not have any money that they did not have any food. Few of the local eateries had given him food for the first couple of days. But, not anymore.
They have somehow got something to eat for the boy. But, the parents had been surviving on water for the last 2 days.
I was stunned. It was about 2:30 in the afternoon. I knew that there should be food left in the mess. I summoned Dinesh. There was quite a bit of rice and dal, enough to feed 2 adults.
I just went to meet the family. The mother and the boy was eating to their heart's fill. It was such a pleasant sight to see. From the way they were eating it was obvious that both the mouths had not tasted food for quite some time. 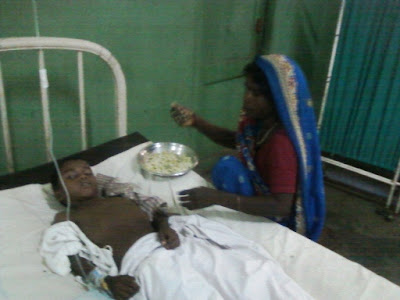 The father had gone home. I had made a deal with the father that if he gets some vessels to cook food, we shall provide him with the rice and pulses for cooking.
Hunger . . . The issue continues to mock us . . . We may be the Cricket World Champions, we have one of the largest armies, our information technology industry is one of the leaders in the field, our healthcare industry is booming, we are one of the leaders in space and nuclear sciences . . . but the bottom line remains that we have quite a lot of our people who still goes to bed without food on account of overspending on healthcare.
Posted by Jeevan at 5:08 PM