Today was my first day after the brief vacation and oh...my....it's turning out into a major one.

To start off, as I left chapel and entered the hospital, Dr Johnson requested me to convince MD to undergo a Cesarian section. Johnson was convinced that MD was obstructed - and I was also convinced. I was thankful when Johnson went out for one more round of negotiations and returned victorious.

MD had been in labour at her home since late afternoon of the previous day. She had also recieved 6 intramuscular injections, half of which were oxytocin. She had arrived sometime after midnight, and had not progressed.

And, I was glad we operated. The outer uterine muscle fibres were starting to snap, there was petechia in the lower uterine wall, the bladder was edematous and there was a part of the lower uterine wall through which I could see the flakes in the amniotic fluid. She would have ruptured within the next one hour. The baby girl had a surprising Apgar Score of 9 and 10.

As I was starting off MD's Cesarian Section, word came that there was a Previous Cesarian without any antenatal check up who had come in with labour pains. She was also posted for surgery as soon as MD's was over.

Patients such as KD actually prevent us from readily jumping in for Cesarian Sections even when there is a faint indication for one. It was unbelievable. KD, who had a previous Cesarian 2 years back, did not even have a tetanus toxoid injection leave alone a proper antenatal check up. KD's Cesarian section was also uneventful although we had to arrange blood as her hemoglobin was only 8 gm%.

Well, I forgot about LD - who was wheeled in as we were taking a decision on MD. LD was about 32 weeks and had come in all the way from Ranka - about 60 miles away. LD was hardly conscious , had convulsions the previous day and was being managed elsewhere before they referred her to us. There was no fetal heart and the abdomen looked too big for 32 weeks.

Shishir promptly did an ultrasound and confirmed dead twins in the uterus. Then we found out that her birthcanal was almost fully dilated. But, for some unknown reason, we ended up doing a craniotomy to deliver the first twin and then the other one was pulled out breech. LD is still not fully conscious.

Then, we had two more normal deliveries, one of which was a small for gestational age baby. And another one which was an Intrauterine Death.

I'm glad we do not yet have a case of Rupture Uterus. But, we do have a elderly primi with post dates whom we've induced. I hope she delivers normally - but sometime back, the labour room nurse has informed me of couple of high diastolic blood pressure readings . . .

Well, for all those who want to know about other patients - we had two proven malaria patients today. SK aged about 19 years had been sick since Wednesday. It was quite obvious - he was shivering as he came to OPD. Then we had VS, who just came in very sick. He has been sick since January 2. He was all yellow - I tried my best to refer him - but to no avail.

And to top it all, two more young ladies with attempted poisioning. One had taken organophosphorus and the other permethrin shampoo . . . Both are doing well . . . 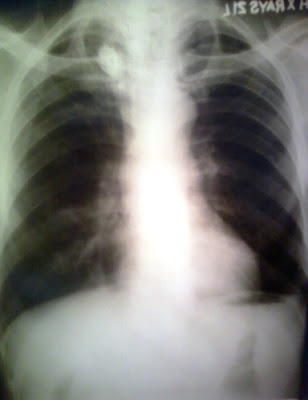