Of late, there has been quite a lot of news items including reports on the honorable Prime Minister commenting on malnutrition among Indian children.


I know that all of us can give umpteen reasons for the predicament of our children. 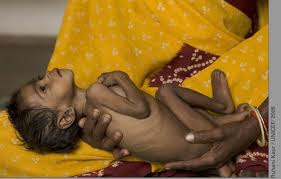 In the light of couple of incidents that happened today in the hospital, I wonder whether 'the perspective' which I want to raise is another very significant determinant of the poor state of healthcare  in our country.


I was on my rounds today morning, where I came across RA who had delivered by Cesarian Section couple of days back. RA told me that she was not secreting enough breastmilk. I asked RA's mother nearby on how often the baby is passing urine. RA's mother told me that she has lost count. In fact, she was cleaning up the baby when we reached RA's bedside, and she looked quite exhausted, which was quite explainable...


Then I suggested to RA that if the baby was passing urine, then the baby must be getting something to feed. RA replied that when she squeezes her breasts, there is not much milk coming. I told her not to worry and to only ensure that the baby is put to the breast at least once in hour hours and then if she demands.


RA did not look very happy . . .Then, to my horror, as I left the ward, the accompanying staff suggested that I write a prescription for a popular breast milk substitute. So much for promoting breastfeeding . . .


Unfortunately, this is not the first time I had a incident similar to this . . . and I had taken the pains to teach my colleagues on the importance of ensuring breastfeeding . . .


4 hours later, I had a patient in OPD . . . Unfortunately, I did not recognize her. She was RK, who had delivered exactly 35 days back at NJH. The complaint was that her baby was very lethargic . . . RK served as a Auxiliary Nurse and Midwife (ANM) in one of the Primary Health Centers in the district . . .


RK was a trained ANM from one of the reputed institutions of the state and she held quite a senior position within the public healthcare system of the region . . .


And she had not recognized that her baby was not gaining enough weight . . . RK was responsible for the well being of mothers and children within quite a large area . . . I can very well imagine how much knowledge she has to impart to her target community . . .


I had a incident which echoed the same sentiment couple of months back. . .  Which was a bit more sad as the SD, the patient died of complications . . .


What I'm concerned about is the knowledge element of quite a lot of staff in the healthcare services. . .  It is very well known that many of them get into the job by unscrupulous means . . . But, at whose expense???


Of course, there are other factors which ultimately contribute to malnutrition . . . But, incidents such as these show that many of our  babies start their lives with a severe disadvantage on account of poor knowledge imparted by healthcare staff who themselves are not very sure of basics . . .


It is high time that, concerned authorities in medical education seriously look at principles which ensure that the right concepts are passed onto students of all healthcare disciplines and market dynamics such as a powerful lobby for breastfeed substitues do not rule the roost and force us into unethical decisions  and practices . . .
Posted by Jeevan at 8:54 PM