I was on duty yesterday…Sunday….

And the morning rounds was a sad one….

We had 3 children with burns over the last 48 hours.

RR, a 3 year old boy was the first to come. It is quite common in rural India for households to cook on the floor. There is no elevated portion within the kitchen to keep the fire. Usually, there is no kitchen… A portion or corner of the house or many a times the outdoors is used for cooking.

RR’s mother was cooking rice for breakfast on a improvised stove outside the house when RR happened to tip over the boiling pot of rice and fell on it. RR ended up with about 20% burns. I could have been worse if the boiling water had fallen over him while the pot tipped over.

The second patient was RK, another 3 year old who had a history very similar t RR. This time the offending item was boiling milk rather than rice. RK’s father owned a tea shop in front of his shop.

The third patient was KK, a 7 year old girl whose case was a very bad one. KK’s mother was in the kitchen cooking when someone called her outside to the shop which adjoined their home. KK’s mother went to attend the customer and returned back to the kitchen. She lighted the match for the stove and the next thing she knows is that there was a big blast and the bed on which her daughter was sleeping nearby was on fire.

The blast brought her other family members rushing to the scene. Somehow, they pulled out KK from within the debris. Luckily, KK’s mother was not hurt.

The whole house along with the shop was completely gutted… We calculated that 90% of her body was burnt with areas of deep burns including her face, neck and genital regions.

KK’s family was into a major tragedy. They are quite well off. But, within the flash of an eye, they are in a major quandary. It was so sad to see KK’s father sitting beside KK within this head buried deep in his hands and bursting into tears on and off.

We offered them a referral which the family readily accepted. Meanwhile, I took RD to the theatre and did a thorough cleaning up and dressing. He had a circumferential burn of his right hand which needed fasciotomy. 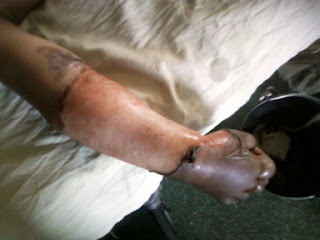 Kindly remember all three children in your prayers.

Meanwhile, do note that all three episodes of burns could have been prevented. In fact, we've had similar episodes before too.

I happened to glance through the folder of 20th National Conference of National Academy of Burns (NABICON 2012) in New Delhi. There is a message in the last cover page which goes – Best Treatment of Burns in Prevention. Of course, we are in the process of putting up a burns unit. I pray that we would be ultimately able to play a key role in interventions which would prevent the occurrence of burns within our communities.
Posted by Jeevan at 5:05 PM