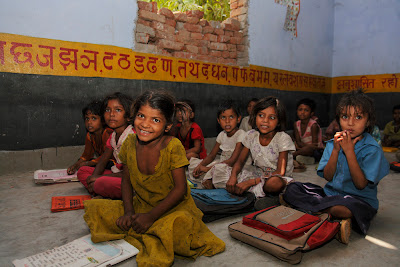 The other day, Angel and me were having a discussion on education and the sea of change that has happened in schools and colleges over the years. The main point of discussion was about all the various standards which have come into place in the field of education especially in our home state, Kerala. There were few of our friends and relatives who were busy preparing for qualifying tests to teach. With all sorts of names like NET, SET etc. these standards were in fact keeping potential new teachers on their toes.

Fast forward to today. . . I was part of a panel interviewing candidates for our school of nursing. The minimum qualification was a pass in Plus 2 or Intermediate.

Interestingly more than half of the candidates whom we interviewed had a graduate degree. They were finding it difficult to get a job and therefore felt that a Auxiliary Nursing and Midwifery degree would help them get a good paying job fast. . .

Well, what was disconcerting was the fact that almost all potential candidates knew much less than basic standards expected of their qualifications.

There was one girl with a Bachelor of Arts in the Hindi language. I asked her about some of the literary giants of the Hindi language and she did not have a clue. There was another candidate who had a Bachelor of Arts in English language and she did not know who Shakespeare was. I was at my wit's end when I asked her to spell 'heart' (told her the hindi word) and she spelt it 'hurt'.

As I glanced through the test papers, it was horrible. Hardly anybody knew how to do calculations with fractions. Half of the batch of examinees agreed that it was Mother Theresa who laid the foundation for nursing as a profession. There were quite a few who agreed that 'gravity' was discovered by Abraham Lincoln. Many in the crowd did not know how many inches make a feet or how many centimetres make a metre.

Then we had a shocker - one girl who requested that her name not be put on the rank list as she did not like nursing. She had applied because her mother has forced her to apply.

We had wives of 2 quacks . . .obviously, they had applied to learn the tricks of the trade and help their husbands. We were relieved that both of them did not do the test papers well.

The common refrain we got everybody singing was how much they loved the great profession of nursing . . . There were quite a lot of them born dreaming about how much they wanted to become a nurse. There were about half a dozen of them who swore that they would do nursing even if they did not get a salary.

We did quite a lot of career guidance too in the midst of the interviews. What else do you tell people who are in the middle of their post-graduations while our qualification requirement is only a 12th standard pass?

After I came out of the interview room, I was left to wonder at the wide chasm that is developing between education being offered at different parts of the country. On one side, we have high class education systems put in place where children vie with one another to be placed in some of the most elite institutions in the world. Whereas on the other, we have students passing exams without any check on the standards. It is not uncommon to see 10th standard students not knowing how to read or write well, graduate students of a particular discipline not knowing the basics of the subject they've learnt . . .

I can only imagine the plight of the healthcare sector where half learnt graduates and post-graduates are churned out and given responsibility of caring for the lives of fellow-citizens. It is not uncommon to see such instances all around us . . . nurses not knowing how to check blood pressure and temperatures, doctors not knowing to arrive at a clinical diagnosis, lab technicians not knowing how to identify an eosinophil, graduates of accountancy/finance looking blank when you talk in financial language at them. . .

It is very evident that unless someone takes the responsibility of bringing in some amount of standards in the field of every form of education, it would not be soon before we could have to face major issues in our day to day life. . . Or are we facing it already. . .