(User discretion advised due to snap of macerated baby)

KB, a 40 year old came to us at around Saturday midnight with a history of term pregnancy, labour pains and loss of fetal movements since one day. Since, Titus, who was on duty, did not get a fetal heart sound, he did an ultrasound which showed a dead baby in a transverse lie.

He did per vaginal examination was surprised to find a 70 cm long rubber tube coiled inside the uterus.

There was no fetal pole palpable through the vaginal orifice and there was a foul smell.

He called me telling about the rubber tube. I felt that something was amiss.

Considering that KB was in labour for more than 1 day, I did not think it as wise to try a internal podalic version which we regularly do. One of our doctors, Dr Shishir is quite an expert in doing it.

I posted her for a Cesarian section.

I was surprised to find out that the uterus looked very much preterm. It looked quite unhealthy too. I was glad that I did not go for the IPV.

As soon as the uterus was opened, stench of decomposed flesh filled the room. The baby was badly macerated and was at least 3 days dead. The baby was female. . .

It was not complicated to piece the events together. Someone had helped the family diagnose a female baby. And they had tried to abort it.

Considering the patient's age, I asked if we could do a tubectomy on her. The family was outright against the suggestion . . . The husband told me that they needed to have a boy. . .

I wonder if she had been aborting like this for sometime since the delivery of her previous 3 daughters the youngest of whom was about 15 years old. . .

I informed the civil surgeon's office and the police.

The civil surgeon had informed the press and they were all over the place by Sunday afternoon. 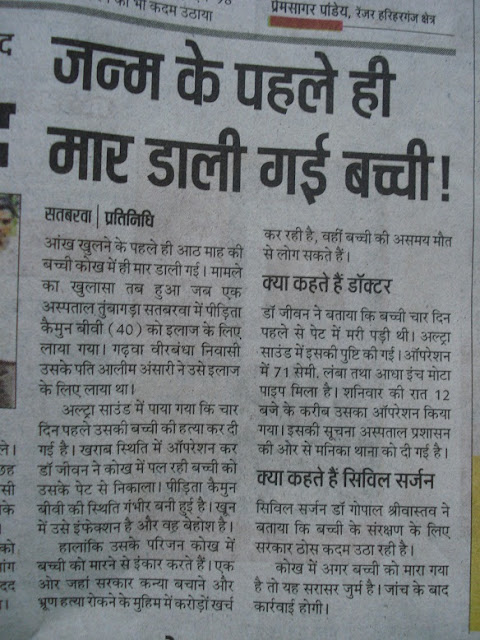 It is sad. Girl babies are not wanted . . . And they are killed ruthlessly. But, it is not only girl babies who are killed. Kindly read a very good article against abortions of any type.  . .

The occasions when we've witnessed clear instances of prejudices against the girl child are umpteen. . . And I'm sure that the cold blooded murder which came to light is only the tip of the iceberg . . .