This is a guest post written by my colleague, Mr. Avinash Biswal who serves as a Project Assistant in the Community Based Rehabilitation Project. This is in response to queries from readers about Community Based Adaptation towards Climate Change. Mr. Avinash is a graduate in Psychology who has done Masters in Social Work from Manipal University. This is his first assignment after his Masters.

Ancient communities have extensive knowledge on climatic conditions and since many generations, they have been using their own strategies to adapt to the changes in climate. But due to reasons like Unsustainable Development and Irresponsible Planning, complications in climate have been increased drastically. Thus it has gone beyond their capacity to adapt to the present Climate Change. Hence, CBA in its strategy never encourages communities to adopt outside strategies, instead it facilitates communities to develop local strategies and enhance their capacity in the adaptation to the Climate Change. 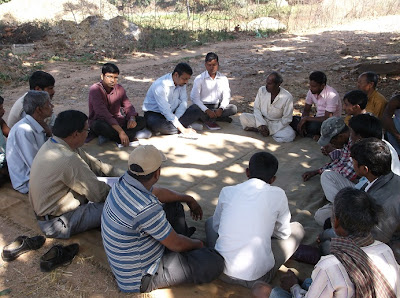 Nav Jivan Hospital has recently undertaken the CBA project in the local community. The target is 30 villages with an approximate total population of about 40,000. The community is severely affected by droughts whereas most of the members of the community depend on the agriculture for their food as well as income. The organisation is working with the community to cope with drought by helping them to adopt drought resistant crops and alternative livelihood.
Posted by Jeevan at 1:49 PM