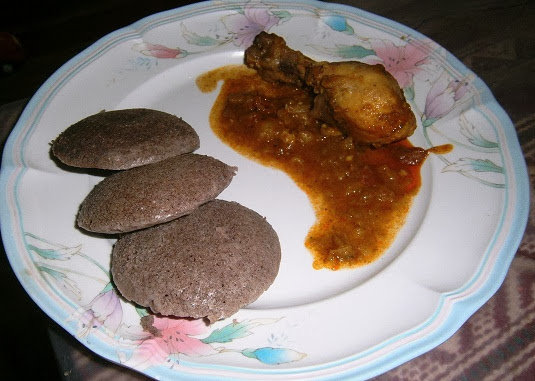 That is the snap of a plate of Ragi (finger millet) idli with chicken curry.

The item is part of a effort from our CH team to re-introduce and popularize finger millet (ragi) cropping in our part of the country.

Finger millet is known by the following names in different parts of the country.

We had found out that millets had been the backbone of the food security of quite a large part of this region of the country for ages. Till the green revolution forced rice and wheat cultivation onto the population. It was furthered pushed on by construction of dams to ensure sustained irrigation.

However, with the reality of climate change, people have slowly started to realize the significance of alternate cropping in which millets play a vital part.

There are quite a lot of websites which glory the use of millets in our regular diet, but I found quite a good blog which describes things in detail. It is very well recognized as on of the best food items that can be given to babies during weaning.

More than all these are the facts about the cultivation of millets . . . I had mentioned about them in my previous post . . .

Well, for all the food pundits, here is the nutritive value of finger millets when we compare to rice and wheat.

I'm sure this will impress you. And one can very well conclude that one cannot address malnutrition without seriously looking into issue of popularizing millets.

More on what our Community Health department is doing with regard to popularising Ragi cultivation and usage in my next post . . .