Today Shahana Khatun got discharged. SK was a high risk pregnancy under our care.

SK and her husband, Mr. Khudoos Ansari were married 5 years back. They had got married against the wishes of Mr. Ansari’s parents. The major reason – Shahana was an orphan and had no-one to take care of her.

SK had first come to us in 2010. She was having non-stop seizures towards the fag end of her pregnancy. We had to ventilate her and there was no progress of her labour after we had induced her. As a last option we had offered to operate on her to remove the dead baby – something we don’t do often.

By God’s grace, Shahana did well after surgery and got discharged in about a week’s time. Unfortunately, the neglect of the family to Shahana and her husband continued.

The second time Shahana became pregnant was sometime towards the latter half of 2011. Mr. Khudoos was away in Chennai. He had made up plans to come towards the last weeks of the pregnancy. Unfortunately, Shahana went into labour a bit earlier. The in-laws did not seem it cost-effective to take her to hospital. They tried a home delivery. In fact, during her first pregnancy, it was only two days since Shahana came with her husband from Chennai that she went into eclampsia.

The end result – Shahana’s uterus ruptured and she ended up with a dead baby. Thankfully, she was brought in time before she developed further complications.

We had advised the couple to wait for couple of years before a pregnancy. However, they started coming for ante-natal care from the beginning of 2013. We tried our best to refer them to a higher centre.

The family was poor and there was no way they could even think of a journey to Ranchi for safe confinement.

After getting all the necessary consent, we made a decision to do elective surgery on her at 37 weeks. Towards the middle, she was admitted twice for pre-term labour. Ultimately, she came for elective surgery last week.

By God’s grace, the surgery was quite uneventful and the family was blessed with a baby boy.

We thank the Lord that we could successfully manage SK's high risk pregnancy. 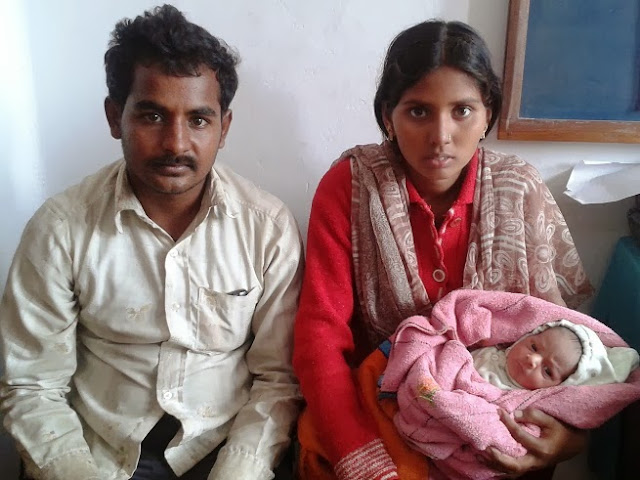