For some reason, one of the major facets of life in Kolkota is the amount of poverty you see in the street. By this, I do not mean that there is any less poverty in the other cities of the country.
Once you arrive in Kolkota station, the filth and the dirt that stretches all the way from the station to the Howrah bridge makes a sorry first impression to any new visitor to the ‘City of Joy’.
I expected things to change after the Red Brigade gave way to the Trinamul Congress in the Writer’s Building. I’ve made pep talk to quite a lot of people ranging from Taxi Drivers to Industrialists and most of them are quite crestfallen when asked to comment on the change.
One of the very common scenes which you find quite often in Kolkota is the vehicles laden with food who dish them out to the people living in the street. I happened to see it again this time and managed to click a scene. I have heard of organizations that does this in many of the cities in the country and abroad. Especially those who collect wasted food from restaurants and distribute it to the have-nots. 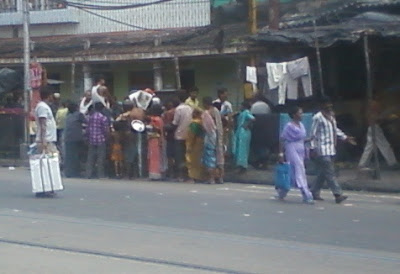 Hunger continues to be a major problem in our country. Certainly, collecting food which could potentially end up in waste bins and redistributing them is a great idea and well appreciated. But, much more needs to be thought about it – especially the strengthening of the public distribution system. Food needs to be made accessible to the poorest of the poor.
One of the major fallouts of a poor food security in a community is the impact it has on the lives of women and children. Women suffer and their pregnancies suffer bringing about chronic malnutrition and anemia which ultimately affect the newborns. The children suffer as they are deficient in energy and essential elements for growth – ultimately affecting their overall growth and they are forced into early labour to feed their impoverished families.
Posted by Jeevan at 10:08 PM