What does this snap look like to you? Somebody sleeping on a bed. This is what our Male-Ward nurse noted in the bed occupied by VVK, a 24 year old man who had been admitted with a very bad necrotising fascitis. 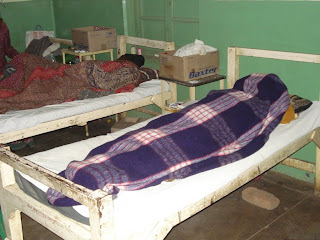 VVK had already been discharged. However, nobody was coming from his home to take him. So, even after discharge, he was in the ward.
Today afternoon, VVK looked unassumingly too sleepy. The poor sister was quite concerned about VVK's slumber. He was already discharged and there were no medications to be given. She thought many a time to wake VVK up. However, she was a bit afraid considering that VVK was young and maybe he was sleeping drunk.
VVK's sleep extending to the late evening. The nurse thought that there was something foul and decided to wake up VVK. She started to call VVK. Then she put her hand on what she thought was the shoulder to shake him. But, what her hand touched was not human body - it looked like some clothes which was bundled up.
Another's patient's bystander helped her to remove the blanket which was covering the supposedly VVK. It was a bundle of clothes and empty medicine boxes covered by a blanket. 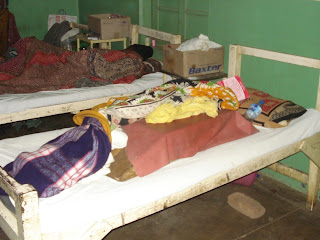 VVK had absconded without paying his bill. I had suspected that VVK did not have money to pay the bill and had asked him about it, But, he kept on insisting that his relatives were coming soon and he will pay up.
VVK was quite sick when he had come. Dr Nandamani had worked on him for quite a long time to clean up the extensive collections of pus on his leg.
It is quite common to see patients running off without settling bills. Many a time I wonder why they do not come and tell that they do not have money to pay the bills. Our charity work has increased by quite a lot. My colleagues comfort me saying that patients who abscond has decreased quite a lot. However, I would welcome suggestions on how to avoid this without being in the wrong especially in a very impoverished region such as ours.
Posted by Jeevan at 8:01 PM

Email ThisBlogThis!Share to TwitterShare to FacebookShare to Pinterest
Labels: absconders