X-Rays with findings - all on a single day

After the quite dramatic X-Ray that we had of NR quite fresh in our minds, I had the shock of my life when I reached the outpatient department today sometime midmorning.
The below are the X-Rays which were put on the line to dry -
1. A 60 year old man with partially treated tuberculosis who has come with severe cough. We await his sputum AFB. 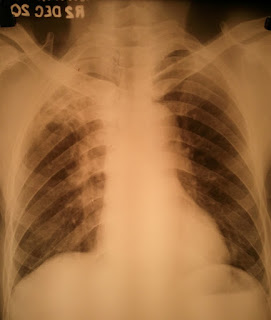 2. A very sad story. 30 year old man with cough of 6 months duration. When I asked him on what treatment he was on - he showed me the medicines shown in the snap after his X-Ray snap. 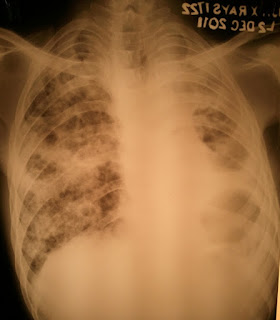 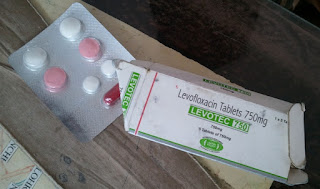 The blister packet on the left is the Category 1 Intensive Phase under the Revised National Tuberculosis Control Programme of the Government. And Levofloxacin is one of the drugs used to treat MDRTB. It seems that a local practitioner has prescribed it. A good recipe for XDRTB.
The young man was quite breathless. He had a saturation of only 70%. The relatives has begged me for admission. His total counts is 25,000 with 90% polymorphs. He needs a miracle to make it.
3. 70 year old man - again partially treated tuberculosis. In addition to this he had bilateral basal crepitations on examination. Shishir did a cursory look at his heart and has concluded that cardiac activity is quite sluggish - hypokinetic.
More concerning was the lesion he had. He is awaiting sputum AFB and an ECG. 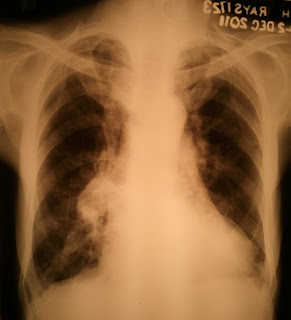 4. Well, the winner is the this one. 45 year old lady, weighing 27 kilograms with cough and loss of appettite since 6 months. 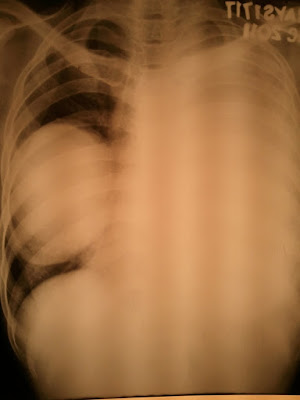 After seeing the X-Ray, I initially thought of a malignancy. Then Nandamani thought about doing an ultrasound and seeing if there was any collection. Shishir reported cystic lesions within the chest and then this is what he saw in the liver. 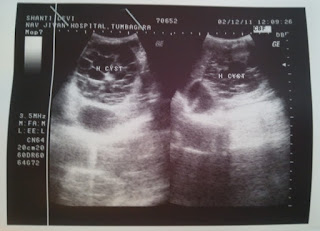 Hydatid cysts. . . We did not know much on what to do. I thought about referral. On discussing with the husband - he told me that 3000 rupees is the maximum he could afford. I prescribed her Albendazole tablets and Prednisolone in a tapering dose for a month.
I had two more interesting X-Rays but could not take the snaps because of the lack of time. However, sometimes when I see the tuberculosis patients, I continue to wonder whether we are really winning the war against tuberculosis.
Would appreciate if you could pause a minute and pray for such patients who do not have much of a hope as well as for the need for healthcare personnal in enough numbers who will be able to cater to such a population quite early during the course of a disease.
Posted by Jeevan at 8:36 PM