Our region has been in the grips of regular violence for quite a long time. Finding dead bodies on the road, news about gun firing and bombs going off are quite regular stuff.
As I had mentioned in one of my previous posts, we had been having quite a number of bandhs since the last 10 days. In fact, bandh has been called today and tomorrow too.
However, today morning, I woke up to the rude shock of a mine blast quite near our hospital which was aimed at a Member of Parliament from the adjacent district. From the latest reports, 12 people, almost all of them policemen have lost their lives.
As I sat reading the news in the newspaper, I got a call from Manika Police Station. They were bringing in someone with a bullet injury. The inspector did not have much idea about where the injury was.
The victim was in his early 20s. The bullet had entered his right flank more towards the back and exited on the left flank. Clinically, it looked like it may have gone through his vertebral column. However, his neurological examination appeared normal. But, he was in severe pain. 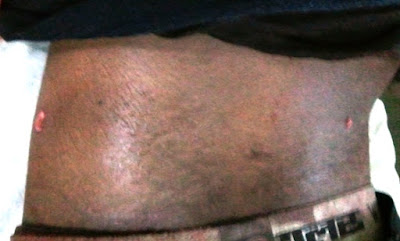 We did X-Rays and a ultrasound. It was almost certain that it did not enter the peritoneal cavity. Amazingly, there was no obvious involvement of the vertebrae. On very careful examination of the lateral spine X-Ray, we could make out an area suggestive of cavitation of the soft tissue with some involvement of the spinous processes of the vertebrae. 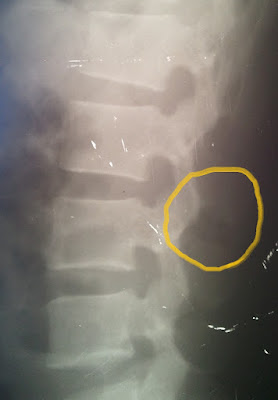 We gave the family the option of taking him to a higher centre which they obliged. The story was that the victim unwittingly got in between crossfire between two naxalite groups.
Many of our friends and relatives question our logic of serving in such a place where there is always danger lurking around. After the gruesome murder of Sr. Valsa John, it is quite obvious that anybody working for the welfare of the poor can fall victim to the violence that can be unleashed in communities like ours.
The patient with the bullet wound was an ominous reminder about the very dangerous society we are part of. We request your prayers. . .
Posted by Jeevan at 12:01 PM