Over the last 2 weeks, we have accumulated 3 antenatal mothers who were quite sick. Unfortunately, they continue to be sick. I've already narrated the story of SDe. SDe has made a good progress over the day - however, she continues to be on mechanical ventilation. I feel that we should be able to wean out SDe out of the ventilator soon.

One young lady about whom I had not mentioned about my blog is SeeD, who had been admitted about 2 weeks back with a very bad rupture uterus. It is a very sad story. SeeD, a mother of 5 had been trying to deliver at home almost 2 days before she reached us. The story is almost the same as we've had for many of the other maternal patients.

SeeD wandered to many places for around 48 hours before she reached us. After we had opened her up, we realised that she had ruptured quite a long time back and her bladder also was quite badly damaged. There was already pus collection in the peritoneal cavity and the bladder wall and the uterus was quite ischaemic. Shishir had to do a hysterectomy and repaired the bladder with the hope that it is heal well.

Then, we had some problem which we still cannot explain. SeeD could not be weaned out of the ventilator. In addition, she developed features of a raised Intracranial Pressure. We requested the family to take her ahead to Ranchi. They told us that they had no money to go ahead for any sort of treament.

To complicate matters, the bladder repair has given way. And she started to put out urine through her peritoneal drain. She remained in the ventilator for about 5 days. And then suddenly, she became conscious and started breathing spontaneously. However, we would need to open her up again to repair the bladder.


After SDe and SeeD, we had another lady come in with a rupture uterus. We shall call her SakD. Once again we ended up doing a hysterectomy after her relatives arranged blood from Daltonganj. I'm yet to collect a complete history from Sakd. But similiar to few of earlier posts where the patient in labour recieved intramuscular oxytocin Sakd had also recieved the same and progressed into a rupture uterus. The fact that she was fourth gravida only made the uterus quite vulnerable to a rupture.


All 3 of them could have died if our colleagues had not intervened soon. A major concern is the bills that they would be getting. SeeD already has a bill of around Rs. 35,000 which is to be paid for the procedures which we've done for her. SakD would have a bill of around Rs 15,000. SakD's family appears to be well off - but SeeD hails from a very poor family. I'm not sure on how they are going to foot the bill. SDe, also has quite a number of interventions including mechanical ventilation going on.


As I see patients like SDe, SakD and SeeD, I wonder whether we should be looking seriously at developing our acute care unit and other capabilities, especially at the level of qualified personnel. However, the bottomline remains on whether people will be interested in coming - especially with the limitations we have and the need to improvise.


Before I sign off, I need to tell you of the couple of multipara monitors we recieved recently through a kind donation from churches in the United Kindom. In the snap below is SDe, connected on to the ventilator and the new MPMs. 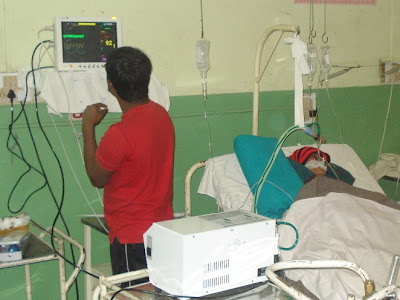