I never had any inkling that I would end up managing quite a lot of tetanus patients. After MS, who was the first tetanus patient who got into this blog - we've had quite a few of them. In fact, at any given point of time, we had one patient in the ward with tetanus. And we praise God - all of them have gone home well. 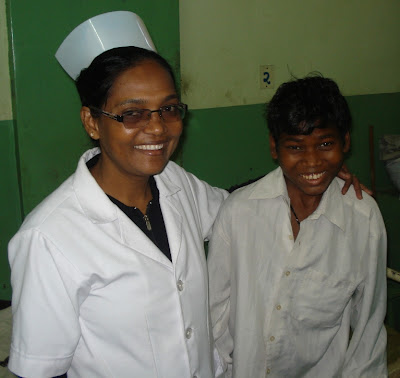 LO is our latest tetanus patient who has been discharged well. We had a tough time with LO. LO was a bit of a adamant boy throwing up all sorts of tantrums - And then, you cannot blame him. One of the problems we face with tetanus patients is the difficulty in putting a nasogastric tube during the initial phase. LO was adamant that he would not allow anybody of us to put a nasogastric tube even after we felt that it could be put.
Maybe, he must be the only tetanus patient in the world who would have survived without a nasogastric tube. His mother was so loving - and somehow she improvised a way to feed him without allowing him to choke on the food. Everyday, we used to fear that he would choke himself to death.
Well, couple of days before we discharged LO, we had a replacement for LO. SK, a 8 year old girl has landed with a quite a bad tetanus. She is presently responding well to treatment. We pray that SK would also go home cheerful.
Posted by Jeevan at 9:29 PM

Email ThisBlogThis!Share to TwitterShare to FacebookShare to Pinterest
Labels: tetanus