Well, kindly take a look at the photograph below. Does it not look like a bucket of floorcleaning solution freshly prepared for cleaning. 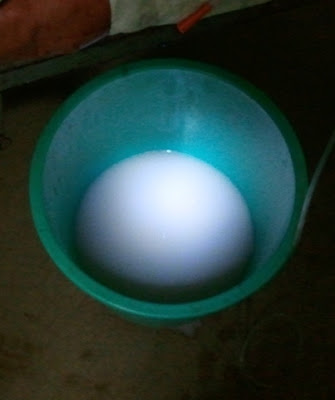 Sorry, you are mistaken. That is contents washed out from the stomach of a 65 year old lady who had come to emergency yesterday. She was totally unconscious and had a poor cardiac activity - heart beating at around 10 per minute or was it a total cardiac arrest? I was not very sure. The pulse oximeter was not picking up any signal.
We started off the CPCR. Unfortunately, both our ventilators were already occupied. There was no other choice other than to bag her manually. By God's grace, we had enough hands to do that.
The history was that CD had taken some unknown poison sometime in the afternoon when her relatives found her unconscious. They had called a local doctor who administered some medicines after which she had become unconscious.
On arrival at NJH, CD smelt of organophosphorus poison. But, it was funny that she did not have the characteristics of organophosphorus poisoning. She had already been to a quack. The relatives got the quack over the phone - he had given her a shot of Betamethasone, Gentamycin and Multivitamin. However, her pupils were normal but she was frothing in her mouth.
After CPCR, I somehow got her heart going and she was put on an Atropine drip. Another line went in with Dopamine. Simultaneously, we were doing the stomach wash and then I suspected that she had mixed Phenol too into the cocktail. ECG showed features of hyperkalemia. In went a dextrose-insulin drip.
For our hospital, she looked out of place. With the mechanical ventilation and 3 intravenous lines running, it was a real sight. The relatives bagged her through the night.
By morning, she was trying to breathe on her on and move her limbs. We are in the process of gradually weaning her out of the dopamine drip. I suspect that the old lady had taken a cocktail of organophosphorus poison and phenol perhaps laced with a third poison like Aluminium Phosphide or maybe Endosulphan.
We thank the Lord for the recovery so far. However, she has a long way to go - the relatives have told me that she is regular anti-depressant medication. Please pray for her.
Posted by Jeevan at 5:04 PM