Over the last week, in addition to the tragedy of 3 members of a single family getting burnt, we did have our moments of joy. . .
The first reason for the same was SD1. SD1 came about 10 days back in a terrible state. It was SD1's first pregnancy. There was no antenatal check up. She had turned up at the neighbouring district hospital after being in labour at home for some time. It was sometime before the people there realised that SD1 looked a high risk case.
SD1 had a hemoglobin of 5 gm%. On per vaginal examination, the cervix was edematous with dilatation of 5 cms and there was meconium pouring out. I was in a fix. The referral letter mentioned that SD1 is being referred to Ranchi. We needed blood. There was only one bystander.
I was thankful when the blood matched. But, one pint was never enough. I was sure that the hemoglobin would be lesser than 5 gm%. However, we had to do the surgery. Otherwise, we risked having a rupture uterus and a dead baby.
We went ahead with the surgery. The baby was sick. But, he somehow pulled through. The bystanders were  quite fast is arranging two more pints of blood. It was quite a relief when SD1 recovered soon to be discharged. 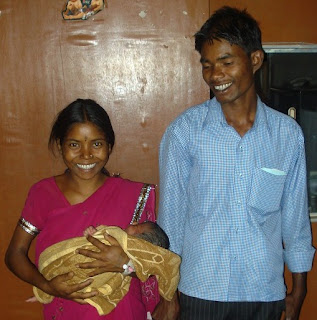 The challenge for us was the bill. Because it involved 5 blood transfusions and neonatal care, the total bill was around 20,000 INR. The family was too poor. It did not need much convincing that they would not be able to afford even half of this bill. They paid about 10,000 INR. The rest went as charity. It is a burden for the hospital. But, considering our vision and mission, we have to make such concessions. . .
The next patient was SD2. Married for 14 years, the family did not have issues. The interesting aspect was that she had a whopping 8 abortions. And the saddest part was that she did not take much interest to do any antenatal check up during the present pregnancy. The delivery was uneventful. It was a pleasure to watch the joy of the family as they adored the new arrival. 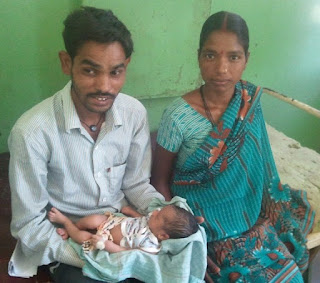 The last one was 2 days back. SS had come with usual labour pains after an uneventful antenatal period. On arrival in labour room, Dr Johnson diagnosed a breech presentation. Since she was a multi, we did not anticipate much problems. But, as soon as the breech was out, Dr Johnson was sure that there was one more baby inside. And yes, she had a surprise twin delivery to add to her already large family of 3 children.
All the 3 deliveries, especially the first two could have ended up as tragedies. We are thankful that all the babies and mothers are doing well.
Over the last 2 weeks, the 'marriage season' has started in this region. It is very hilarious. Everything revolves around the weddings. Almost everybody in the ward requests for a discharge citing excuse to attend a wedding or to get married . . . We expect quite complicated cases to come in during this period. In addition, we have students from the Christian Medical College, Vellore visiting us for the next 2 weeks. Do continue to follow the blog . . . there should be interesting posts continuing . . .
Posted by Jeevan at 12:59 PM