One of the major clinical conditions that we manage at NJH is tuberculosis. In fact, I get this weird feeling that as we go forward, we see more and more cases of tuberculosis. And to make matters worse, we see all varied types of presentation of tuberculosis. I’m sure that almost all of my colleagues serving in various hospitals of EHA including my friend, Augustine at Madhepura would also vouch for that.
The X-Ray below is of a 26 year old man who came couple of weeks back with a cough of 6 days duration. We started to manage it like a usual Respiratory Tract Infection. Then, he came back saying that he was not feeling fully well. Which prompted us to take this Chest X-Ray . . . which says it all. Later, we got a previous history of cough from him for which he had taken treatment from a quack. 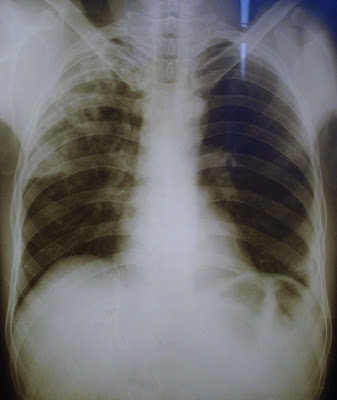 Most probably, he would have received some amount of anti-tubercular medicines which would have kept the bug suppressed to some extent for some time. Which has probably started to invade as soon as the effect of the medicines waned off. I’m sure that he would become sputum AFB positive if we waited for some more time . . .
Then we have people like HN, who had come here about 20 years back and took treatment for symptoms suggestive of tuberculosis. However, he took treatment for only about a month . . . and stopped it since he became alright . . . a common cause for discontinuation of anti-tuberculosis treatment even today. HN is 75 years now, a wizened old man who coughs badly affecting his sleep since the last one month. 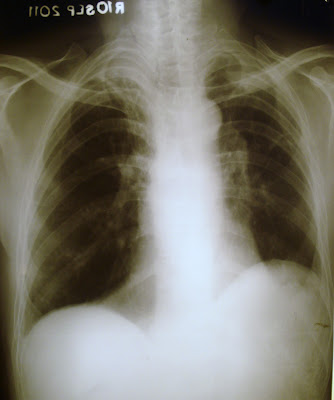 Those findings have not appeared overnight. It is fibrotic bands from an old tuberculosis infection.
The worst sufferers are children. Many of them remain undiagnosed for quite a long time. I had this 4 year old boy with a 2 week history of cough. And this was how his X-Ray looked. I’m not sure if the findings appear clear in this picture. 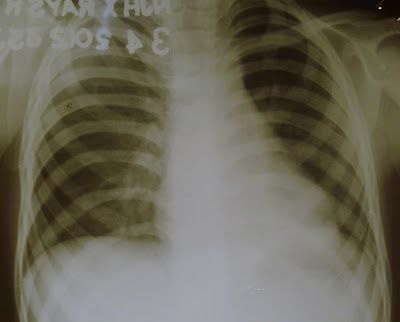 And worse are those who suffer from tuberculosis meningitis. Lumbar puncture is not something that doctors do on a routine here. They do it only in higher centres. With a quite high incidence of cerebral malaria and encephalitis, tuberculosis meningitis is not thought of until the patient is quite bad.
We have two patients in the ward. One of them allowed a lumbar puncture whereas the other did not not.
Unfortunately, the one who allowed the LP is quite sick – with a Glasgow Coma Scale of 5. The other patient improved quite well on anti-tuberculosis medication. Below is the typical cobweb formation which appeared in CSF on overnight standing . . .
Well, after all this . . . snaps from the World TB Day celebrations which we facilitated in Palamu district, thanks to the Axshaya Project of the Global Fund TB Round 9 . . .