Summer has started and patients with snake bites are back. Over the last one week, we had 3 patients - first one with viper bite, and the other 2, cobra bites - both of them coming over the last 2 days.

The second patient, and the first cobra bite victim, a middle aged lady who was bitten yesterday night had come sometime early morning yesterday. She was hardly breathing and was in a total neuromuscular paralysis. It seems they had been trying black magic (locally called 'jhad phuk) to remove the poison all through the night.

Early yesterday morning, someone suggested that she be taken to NJH for treatment.

She had to be intubated immediately and started on mechanical ventilation. She responded quite well and was out of the ventilator within 2 hours after having received 10 vials of the anti-snake venom. By evening, she was sitting up and we kept her for observation overnight. She has some local swelling which would take some time to subside. 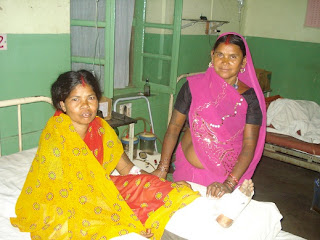 Well, she is a milestone patient for us as she has been treated completely free under the RSBY.

The third patient, a young girl with an unknown bite came sometime late afternoon today. The diagnosis was very obvious - either a krait bite or a cobra bite. The clotting time came out normal. Therefore, cobra bite. In went 10 vials of the anti-snake venom and she was soon on her way to complete recovery. 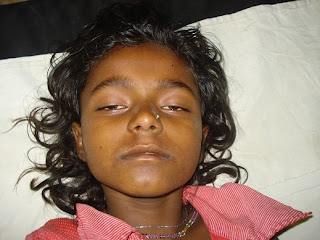 However, I should tell you a bit more about the little girl. She had been bitten sometime early morning. She came straightaway to the district hospital. She was kept there for about couple of hours although a diagnosis of snake bite was made. And at around 1 pm, she was referred to Ranchi. Someone suggested that they try out NJH. And that's how they reached here.

It is unfortunate that the district hospital has no facilities to keep ASV, when the prevalence of snake bites are quite high in the region.
Posted by Jeevan at 5:29 PM