Being in a very rural area of the country, we’ve our own ways of getting entertained. One type of entertainment we get is from the very stupid and silly questions and suggestions that many of our patients and the relatives give us.

And the group that does this sort of thing are usually young men from the villages who would like to show off. Sometimes they can be a pain in the neck. Most of the time, we find them hilarious.

It is not very difficult to spot them in the hospital. Wearing tight jeans, goggles and having an air of superiority in them, they appear to have been transplanted from one of the malls in a city.

Only when they open their mouth to talk do you realise that they are of the type I am mentioning.

The best example I remember happened during my first stinct at NJH about 8 years back. Such an young man  came along with his sister. Having almost the same attire I mentioned above, he had a bandana tied around his neck which made him look a bit threatening.

It was obvious that his sister was in severe depression. She had recently failed her 10th standard exams for the third time running. One of the local quacks had taken the family for a ride. He had been giving her umpteen number of injections and had recently suggested that it appears that she has air leaking from her lungs.

Quite an audacious diagnosis. And presto, our hero took out an X-Ray and started to show me the areas where the air is leaking. It was obvious that it was not her X-Ray. It was an overexposed film. On clinical examination, she was absolutely fine.

Well, to make matter hilarious, she suggested that I operate on her. Operate on her??? I could not believe my ears.

I told him that we don’t do surgery of the lungs in this place and I shall put her on some medications by which she should be alright. He would not have anything of it.

He suggested the surgery which I should do. . . ‘You take her to the theatre. The put her on the operation table and elevate her leg end so that the upper portion of the body will be at a lower level than the legs. Then, put a nick on her big toe. The leaking air from the lungs would escape thus’.

The imagination of this young man was the wildest I have heard so far. I told him that I shall start off with the drugs and later take a look at her. I never saw the duo again.

I remembered the above incident as, recently, I had another incident involved another of these show off guys.

It was busy couple of days back. The acute care unit was full.

There was this young man who stopped me while I was walking down the corridor. He told me. . .

‘He doc, there’s quite a lot of development in this place since last few years. It’s really amazing to see all the new gadgets and people in here. But, tell me . . . there’s one instrument that  I saw today in your ICU which I cannot make any heads or tails about. It should be one of those new gadgets as I saw it was being used for patients with different diseases’

I thought he was talking about the multipara monitors. I was a bit free . . . so I told the guy to come along with me and show the instrument.

I could only hold the laughter . . . Below is the snap. 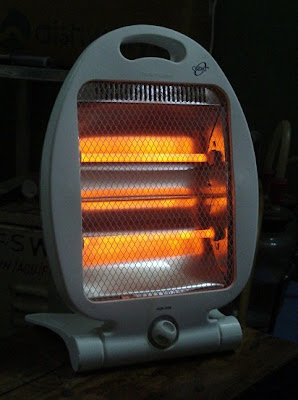 One of the new halogen quartz room heaters . . .

When I told him what it was . . .  he was quite disappointed. He has been with his patient who was in Intensive Care for the last 3 days. I wonder what all he must have told his friends about this new machine.