Below is the snap of a mother and her baby which is quite a major encouragement for us at NJH. 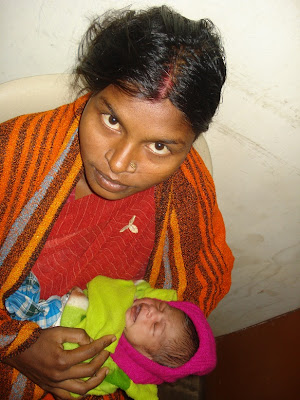 This is UD and her baby. I hope you remember the baby with the gory face in the post. Yes, this is the same baby whose face was all lacerated. And she was quite sick when she was delivered.

We also thank the Lord for BD and GD, both of whom are recovering well. BD had a very bad rupture uterus which was neglected for long. And GD had come with severe eclampsia and pulmonary edema. We look forward to discharge both of them in a couple of days. I'm sure that I'll remember forever the sight of GD's uterus after we ended up B-Lynching it twice.

Well, the stories of neglected pregnancies continue. I write this just after coming back from theatre after an unsuccessful attempt to save a baby whose hand prolapsed. The mother has never had antenatal check ups. There was no pain. However, I doubt the history as there was hardly any liquor inside the uterus. Rather is was quite dry. We ended up putting a inverted T shaped incision over the uterus to deliver the dead baby. It was a fresh still birth. In fact, we had got a heartbeat before the surgery.

As I mentioned in one of my previous posts, we are yet to explore the devastation of neonatal deaths. caused in our surrounding communities.

In addition, we also had 3 cases of eclampsia of some form or the other over the last 48 hours. However, all 3 mothers are doing fine. Although the babies dies. Well, one of them has been a diagnostic dilemma which I would narrate in my next post.

Well, the final shot .. .. .. the patient RN, on whom we had done a repeat Cesarian. It turned out that the patient was registered in the hospital in the name of the first wife who is dead since 4 years. Our nurses realised it when RN did not respond to calling her name. In one sheet, she had accidentally told her original name. Someone thought about calling her that name. And she responded to the call.

My friends in RSBY . . . I hope you have read this. It may be a odd case but has made a very interesting story on how we can be easily fooled.

(Consent has been obtained before taking the photograph. The patient has been given a concession of approximately 25,000 INR (The total bill for both mother and baby was approximately 40,000 INR). However, the family has been informed that there is no compulsion on her to allow us to take this snap and use it for field publicity efforts aimed at getting specialist healthcare staff with a heart for caring for the marginalised to join hospitals like NJH)
Posted by Jeevan at 9:45 PM