Over the last 2 week, I was put into a very complex situation where we ended up managing few patients who had crossed 80 years of age. We started our Christmas celebrations, but the work in the hospital continues. It's been busier than usual. Many think that geriatric care would be for the urban areas, but of late, we have been exposed to the stark truths of caring for the elderly. With the quality of care we give, we expect geriatric care to become a major speciality of care at NJH in addition to the maternal and child care. 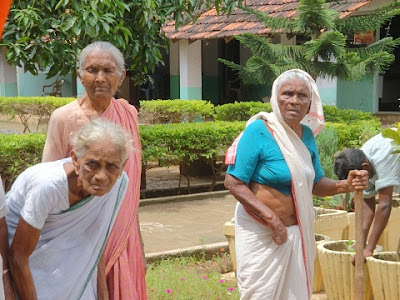 I wanted to narrate about 3 patients. Let me put them one by one . . .

1. It was early morning. I reached the Acute Care Unit for rounds. A 86 year old gentleman, whom we shall call AB was wheeled in almost unconscious. He had fallen from his bed early in the morning with his head hitting the floor. There was a bump on his forehead. The blood pressure was very high initially but started to fluctuate after that. The pulse rate was low. The obvious diagnosis was a head injury. They gave a history which seemed to be like a seizure, but the description was not a classical one. However, we had started him on Phenytoin.

Meanwhile, as we counselled the patients to take him to Ranchi, he had a very bad episode of seizures. And then he became totally unconscious. I had sent for electrolytes - which came as normal. The relatives were all out to somehow save him. I told them that there may not be much chance for him.

They took him to Ranchi. I knew few relatives of the patient. I found out that in Ranchi, they did a CT Scan and found out that he had no problems. In fact, his sodium was on the lower side.

Today, it's crossed a week after he was admitted in Ranchi. His sodium is still fluctuating and he is in Intensive Care. Yesterday, his son told me that the expenses are now beyond their means.

FG was being treated in Varanasi with chemotherapy. His last cycle of treatment was about 5 days back. I suspected septicemia. We started him on oxygen and antibiotics. I told the relatives that we do not have much experience of managing side effects of chemotherapy. But, they told me that they were quite exhausted with the care they had been giving FG. The son told me, 'Please do whatever you can. We cannot take him any further'.

The blood results came after couple of hours. He was in a very bad pancytopenia. The lab staff could spot only 3 white blood cells in the entire peripheral smear. And there were no platelets. They called me and let know the result.

I called the son and explained the predicament. The chances of survival was almost nil. He graciously accepted it. A decision was taken not to resuscitate should FG arrest.

He arrested within 10 minutes.

3. Around the time that FG arrested, came in a very rich family with a 82 year old. At a glance, it was obvious that she was not breathing. There was a very faint heart sound. The pupils were reacting.

The history was that one of the doctors had referred her to NJH. She was talking till about 1 minute back when she collapsed. The relatives were ready to spend any amount possible to get her alive.

We put her on the ventilator and initiated CPCR. The heart got going. However, there was a very harsh murmer. The ECG leads showed cardiomegaly. There was massive hepatomegaly. The cause of her sickness was her bad heart. But, we did not have the facilities to pin point a diagnosis.

I told the relatives that a clinical examination showed that there was not much that we could do. It was quite difficult to convince them. One of the sons suggested that we do heart surgery. However, couple of other relatives arrived who conversed sensibly.

She arrested after about 20 minutes. I told them point blank that the heart had stopped again and I am not going to resuscitate her. She was taken off the ventilator. I requested the eldest son if we could do an ultrasound post-mortem to confirm the clinical diagnosis. He agreed.

There was massive cardiomegaly and it appeared like the heart had herniated through the diaphram into the abdomen and pushing the liver down. The liver was enlarged.

Geriatric care is one of the modern sub-specialities of medicine which would be needed to a great extent in the coming years as the elder members of our communities would grow in number and non-communicable diseases become common.

To make matters worse, nuclear families, poverty and post-modernist views complicate geriatric care. When people have the necessary finances to look after the elderly in the family, there is a lack of family members who have the time to look after them. When there are relatives to care for the elderly, there is a lack of finances. There is an emphasis on the growth of the individual rather than an effort to care for others.

As I write this, one of our staff who had admitted her 100 year old mother came and requested for discharge. In the beginning, they were quite pro-active in getting the elderly lady the best possible treatment. None of the children was free enough to be around with the lady to look after her. They had the money to take her to the best facilities.

I'm sure that each of us are going to face this issue when it comes to our parents and would one day face it ourselves when we ourselves our old. Something that sends shivers down the spine.

I can only think about the famous Serenity Prayer . . .

God, give me grace to accept with serenity
the things that cannot be changed,
Courage to change the things
which should be changed,
and the Wisdom to distinguish
the one from the other.

Living one day at a time,
Enjoying one moment at a time,
Accepting hardship as a pathway to peace,
Taking, as Jesus did,
This sinful world as it is,
Not as I would have it,
Trusting that You will make all things right,
If I surrender to Your will,
So that I may be reasonably happy in this life,
And supremely happy with You forever in the next.

Lord, when I have elderly patients,
please give me grace to convey them hope to face the unknown,
courage to tell them the truth
knowledge and wisdom to minister to them.

May we learn to live one day at a time,
Enjoy one day at a time
Accepting hardship as a pathway to peace
Taking, as Jesus did,
This sinful world as it it,
Not as we would have it,
Trusting You to make all things right
If we surrender to Your will
So that we would remain reasonably happy in this life
And supremely happy with You in the next.