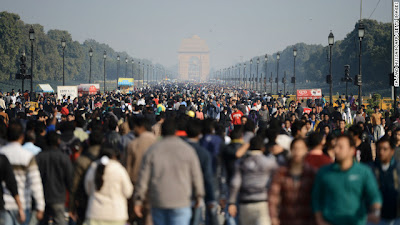 Over the last year, we've seen 2 major peoples movements on the streets . . . The first one - Anna Hazare's crusade against corruption which seems to died a silent death . . . The second one, the embers of which are still burning - the nation's outrage against the Delhi rape case. We are still not sure of what the outcome of the second movement would be.

What does one make out of these sort of mass protests. We've seen similar protests taking place in other countries too. But, they made much impact. We're all quite familiar with the White Revolution which started off in Tunisia and went on to engulf Egypt in an unthinkable way and later and continues in Yemen, Bahrain, Syria, Lebanon and Jordan.

The question is whether we could expect such a result in India. My opinion is that we may not.

The reasons are many. I shall try to put couple of them in this post . . .

1. Although a single country, we are divided. Divided in terms of language, culture, cuisine, economic power, caste etc. etc. We've all been actively following the Anna's movement against corruption. We all know that corruption has been entrenched in our veins since quite a long time. When a decision needs to be taken against a corrupt person, all the divisions which are amongst us play a very crucial role.

2. This is with specific reference to the issue of violence against women. Keeping women in subjugation has been a prevalent practice in almost all of the cultures of the country. If there is any difference, it is the tribal communities of the North East where the woman is empowered to quite an extent. I've put many of the instances where the girl is treated inferior to the boy during our clinical practice here at NJH.

However, I strongly feel that there is a silver lining to both these mass movements. The very fact that the Indian citizens have responded to both these themes is something which needs to be appreciated. However, responses need to be made at the grass root level too. I repeat the same which I made in my post on the Delhi rape case.

The change we look for needs to be started in our families and communities . . .

For corruption . . .  how many of us would resist giving that extra 100 rupees for a berth in our trains, or the extra 100 rupees for chai-pani to the government clerk who has to issue us a certificate or the 500 rupees to speed up the process of obtaining the driving licence. I'm afraid that this is going to take some time . . . but unless this sort of a resistance to corruption builds up the grass root level, we would not go much distance in eradicating the evil of corruption.

With regard to the violence against women . . . we need to bring up our daughters with the same love and care that we give our sons. As of now, the birth of a daughter brings a pall of gloom in most of the Indian homes. I can tell you instances where the daughter in the family is illiterate whereas the son has gone on to become an engineer. Recently, one of my acquintances was telling me that he was finding it difficult to find a suitable match for himself as none of the prospective brides from his own caste had any education beyond Class X. In fact, it was reported that there were about 25 reported cases of molestation of women while the nation was protesting the Delhi rape.

As we go on the the New Year 2013, I wonder what are the other issues on which we would need a people's movement . . . another issue which would bring out the crowd into the streets of Delhi . . .

I strongly feel that the issue of the Caste System is something that is playing havoc in our country. Of course, we've already have had the Mandal commission protests way back in 1990. But, to be very honest, the caste system thoroughly divides our society . . . Villages, communities, colleges .. .. .. it is very sad to see this division causing so much of mistrust and antagonism.

A national integration with respect to language and culture is a distant dream . . . However, there is a crying need for a eradication of the caste based mindset among our communities which is many a time worse than apartheid.

Wish you all a better India in 2013. I pray that each of us will strive to work together for making our lives enriched and our nation a better place to live in. May each of us be a blessing to our neighbours and communities .. .. ..