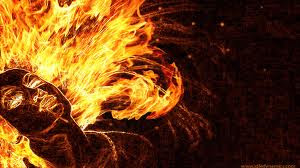 This is the story of a lady with a very bad burns who was brought to us about 2 months back.

Initially, we did not know why she tried to commit suicide. Now, we know.

Her husband had another woman and it was difficult for her to accept it. We came to know about it only towards the fag end.

TD had doused herself with kerosene and set herself aflame. She sustained about 40% deep burns mainly of her face and trunk. It was very difficult

However, she fought valiantly . . . before she gave up. She gave up as she realised that there was no adult to whom she could look up for support.

For about couple of weeks, her husband came on and off. Then, her constant companion was her daughter. She had a teenage son whom we never say.

It was a sombre atmosphere during rounds each day when we could not tell much to this little girl.

The staff eating in the mess shared their food. But, that was not enough. She needed blood . . . more food . . .  someone to hold her when the dressings took place. And there was none.

The bystanders of her fellow patients said that she better be gone as her life is going to be miserable.

Another story of the abandoned and uncared woman in the household.

In another room near to where TD died lies CD, the new mother with 2 girl babies . . . both of them weighing not more than 1.5 kilograms. Every day I visit CD, the gloom pervades the room. It's very obvious that the family looks forward to CD getting pregnant again soon and try to deliver a boy baby. The fact that she went through a difficult pregnancy (twin pregnancy with eclampsia) does not hold any value for the family.

Yes . . . another example of women being left to fend for themselves in a male dominated world.

The total cost of treating TD was about 75,000 INR for almost 2 months. Her family had raised about 25,000 INR. We're glad that we've been able to write off the rest. However, this would mean that we need help to subsidise the care of such patients.
Posted by Jeevan at 1:45 PM