In one of my posts towards the beginning of my blogging life, I had mentioned about how cheap vegetables could become in our region especially if the climate is really good.

After that post, the prices of vegetables did not come down as much as during that time . . .   till last week.

And it happened within the campus.

We have one drum stick tree (moringa oleifera) in the nursing school. One of our senior staff informed me that the tree is full of the drumstick fruits. And that it needed to be harvested.

I requested the guys from the maintenance department to pluck the fruits. I expected about 100 odd fruits to be brought to my office. Instead, I had about a quintal of them brought it.

And then I found out that it did not have much takers. There were if I was going to distribute them free. 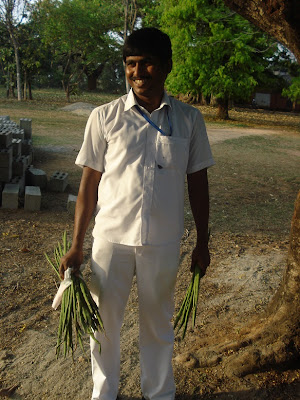 And only the office staff know the difficulty with which we disposed off the fruits ensuring that none was wasted. There were quite a lot of them who commented on how often they had been having this vegetable for some time in the recent weeks.

About the drumstick . . . it is touted as an answer to malnutrition in the third world countries.

I wish we could do some more planning and ensure that everybody understands it's nutritional and commercial value.
Posted by Jeevan at 10:35 PM