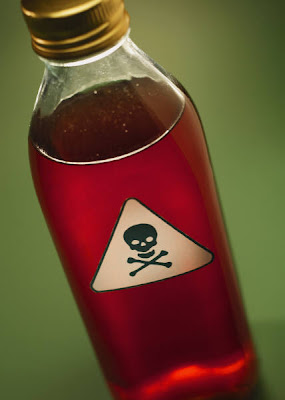 Yesterday afternoon, we had an unconscious middle aged lady wheeled into emergency. She was gasping and had allegedly taken some poison.

The relatives identified the poison as Furadan, a carbamate poison. However, our attending doctor was quite knowledgeable to question the involved poison as Furadan. There was no characteristic violet color discolaration of the tongue or stomach contents. And there was no smell. And most important, there was tachycardia, no constricted pupils or increased secretions.

She had couple of seizures before reaching hospital. We had already started midazolam and phenytoin. As we tried to intubate her, she had more seizures. All her teeth were in the worst side of decay and couple of them got removed during intubation. And she had a short neck. Ultimately, we had to give her scoline to get complete relaxation.

With her on the ventilator, we had to find out the real poison. We placed our bets on Endosulphan. We had already seen couple of endosulphan poisonings over the last year. And the presentation was quite similar.

Titus had already asked the relatives to get a bottle of the offending poison.

The relatives brought the poison. We asked one of them what it was. The answer was ‘furadan’.

It was quite disconcerting. What was being passed on as ‘furadan’ was ‘endosulphan’, one of the most toxic of all poisons in the world.

The lady has improved well over the last 24 hours. We could extubate her by today morning.
She should do well.

However, the fact that highly toxic pesticides like ‘endosulphan’ is commonly available and is being unknowingly used by farmers is very concerning.
Posted by Jeevan at 11:42 PM