The elderly lady sitting in front of me in the medical camp couple of days back in a village near Panki was the epitome of all what stood for geriatric care in rural India.

The rugged creases on her face and forehead would have been the delight of any professional photographer. She had such an artistic expression of the ruggedness of the countryside. 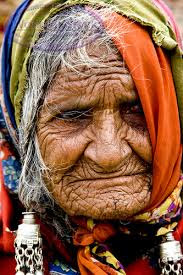 Then I looked carefully into her face. Both her eyes were glazed, caused by hypermature cataracts. I wondered how long she has been blind. I looked more carefully. In addition to the cataracts, she had pterygium in both her eyes.

Then I noticed that she was feeling her surroundings with her hands. I was having the glass of
Sprite which was on table while she was helped to the patient’s chair by one of the volunteers.

As I helped her hands on to the table, I was horrified to see that both her hands were stiff from the shoulder down. The elbows were bent and fixed at an obtuse angle. The muscles had obviously wasted away. I asked her about her hands. Small pox . . . that was the answer.

The best thing I could do was to help her out with her cataract. However, the volunteers told me that she had come alone. They could not trace anybody who knew her. Tracing her home could take some time as people from more than 50 villages had come for this medical camp.

I wrote on her case sheet. - Bilateral cataract. However, no relatives to help with decision.

I gave her some multivitamins. And, a dosage of deworming medicine.

She got up to take leave. She wanted to know if she got some medicine. I told her I have written some. She was happy. She gave me a toothless smile . . . very similar to the one that a baby gives you when you give her a cuddle.

And as she stood up, I was horrified to find out that she was bent over. She had  a very bad spinal gibbus. It needed quite an effort from her to change her position.

I once again asked the volunteer to ask her about her relatives. She had overheard me. She waved her hand and told me that nobody bothers about her. So, there was no point in asking that.

A very simple condition like a cataract was a major challenge for her. We were ready to treat her, provided she had someone to take care of her during the peri-operative period.


The sad state of our society where the elderly find themselves at the margins with nobody to turn to for help says quite a lot.

(The snap used in the post is not that of the lady mentioned in this post. This has been googled.)
Posted by Jeevan at 12:00 PM