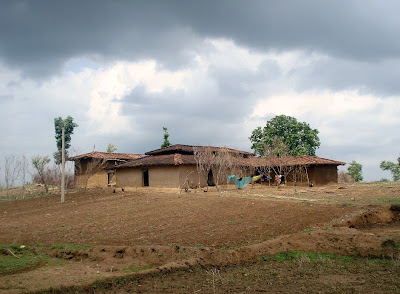 As is the custom, my colleague and I went straightaway to the village headman’s (mukhiya) house as soon as we reached the village. After exchanging pleasantries, we got into the serious discussion about the issue of people with disabilities for whom we had made the visit.

I shall write about this in another of my posts.

The mukhiya was from a caste which is designated as backward. He got the opportunity of being elected as the mukhiya because the panchayat had the status of being a reserved panchayat where only a person from the backward caste could be elected.

What I would like to portray here is my walk from the mukhiya’s house to the government run village play school (anganwadi).

The mukhiya’s house was very close to the main road. However, his immediate neighbours were all people who were deemed as that of a higher caste. It was obvious that most of these people did not want to do anything with the mukhiya.

Cursory glances went up as we walked through this ‘high caste street’. There was no word uttered. Contrary, there were murmurings going on mainly between the womenfolk who were sitting in the courtyards of their homes.

The next street belonged to people of another caste whose major occupation was dairy farming. However, here the mukhiya had people asking him very sarcastically about the work he was doing. There were women asking him if there was some new government scheme in the pipeline. The tone and mannerisms did give away the mistrust they had on him.

The anganwadi was in the area where another caste was dominant.

I enquired about the Harijans - the supposedly lowest caste. Gandhiji gave them the name Harijan which means God’s people.

One of the men pointed to clump of thatched houses a bit distance away from the anganwadi.

Previous experience has taught us that it may not be wise to rush to this group. The problems would be the maximum here. But, almost the whole of any rural Indian village do not consider them humans. We would visit these houses at a later time.

Other than the caste system, one more aspect which concerned me . . .

The filth and dirt in the streets was appalling. One of the villagers commented that if it rains it becomes worse. Of course, the situation was worst in the area where the dairy farming caste was living. Conditions were perfect for the outbreak of an epidemic of any water borne disease. It would be a miracle if nobody got malaria in the entire village every week. And of course, the worst part . . . there were no toilets. It was open air defecation all around.

It is not uncommon to see romantic depictions of rural Indian vistas portrayed in many avenues.

However, I’m sure that what is depicted above is not an uncommon scene in many of our villages.

(Apologies for no snaps from the visit in this post. This is because of feedback about villagers not being comfortable about outsiders taking snaps. There is regular talk about the press and NGOs taking snaps from villages and using it for nefarious purposes. The snap given above is that from another village)
Posted by Jeevan at 7:27 AM