Rupture Uteri . . . and the luckiest of them

Over the last 1 week, we’ve had 4 patients with rupture uterus.

Two of them were previous Cesarian sections who tried to deliver normally elsewhere. One of them continues to be very sick. Today we found out that she has developed a vesicovaginal fistula too.

However, the luckiest of the lot seems to be Kanti Devi, a 28 year old lady who had a twin pregnancy after 2 previous successful pregnancies, both of whom needed Cesarian sections.

Now, for the present twin pregnancy which she was not aware about (as she did not have any sort of antenatal care), she started to have pains since about 3 pm on Friday afternoon.

The kept her for some time at home after which by around 8 pm, they took her to a nearby private clinic.

They waited for almost couple of hours after which they realised that something was amiss.

The relatives brought her to NJH with a diagnosis of undelivered second twin.

Dr. Shishir, who was on duty did not need to ponder much to diagnose a rupture uterus.

The surgery was uneventful.

I’m sure that this would be a very rare presentation of a rupture uterus - a patient with 2 previous Cesarian sections who in her third pregnancy conceives twins. She delivers a live baby by normal vaginal delivery and then ruptures her uterus and loses the second baby.

And here is Kanti Devi with the surviving twin . . . 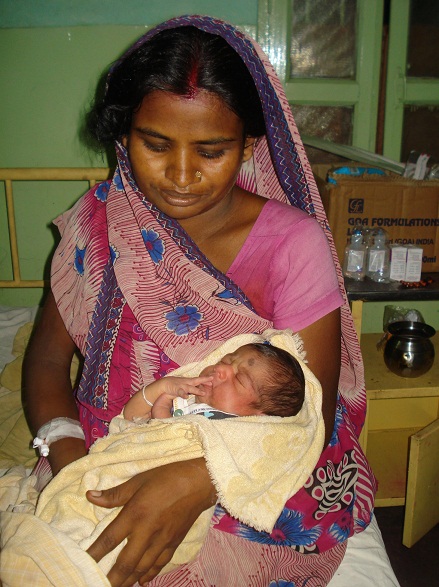 The snap has been taken after obtaining consent from the family including the patient.
Posted by Jeevan at 10:22 PM