There has always been a debate on the cost at which societies have achieved development and progress. However, it is not an unknown truth that most of the progress we see around us happens at the expense of the poor and the marginalised. The issue becomes more sad when lives are lost in the process.

It has not been many days before we had another accident in front of our hospital which claimed yet another life. The difference being that the unfortunate victim this time was a boy on his way to school.

The accident occurred at around 9 in the morning. I got to know it as it involved one of our senior staff. Mr. Tapeswar oversaw the functioning of a hostel for kids from remote villages who went to schools nearby. There were not many kids – but it was enough to keep him busy.

The unfortunate victim was about 6 years old. And was on his way to school when an overspeeding Bolero jeep smashed into him. From the people who had seen it happening, it was obvious that the boy died on the spot.

Well, the stretch of road in front of our hospital is quite good and there is a tendency for vehicles to speed up. I wonder if the number of accidents would increase once the whole of the terrible stretch of road between Ranchi and Daltonganj is repaired.

And we are having our road repaired on a war footing since couple of days. We’ve heard that the Deputy Commissioner of the district has given an ultimatum to the Public Works Department to complete the work by the 15th of April. This is good news for us especially our school children who travel about 60 kms to and fro daily.

That night, I wondered about how inequality reigns in our society is. Most of the infrastructure development happens which do not directly benefit the real poor. Rather, the development occurs at the expense of the poor and the marginalised.

We’ve high speed express highways between cities that speed up traffic but which hardly brings any development in the poor villages that line the highway. It is not an uncommon scene where electricity high tension wires pass through villages which has not seen electricity. High speed express trains whiz past malnourished children waving at the passengers.

The little boy may not have died if the road was not too smooth for the Bolero to whiz past at such a high speed. I tried to contact some officials from the Public Works Department about the possibility of putting couple of humps on the road where there is a possibility of drivers trying to speed. I was told that humps are not permitted in the National Highways. I’m not going to give up.

The accident brought into light the aspect of development about which I had been referring to at the beginning of this post. The collateral damage that communities pay to ensure smoother lives for better off fellow citizens is sometimes quite large. I remember an incident that an agrarian family narrated to me while I was doing part of my post-graduate posting in RUHSA. It was about herds of cattle and goats being mowed down by high speeding trains.

The railways have of course brought the land for laying the rail tracks. But, they created a barrier to many a family from accessing prime pasture land or water bodies. It is of course impossible to provide throughfares at short intervals. But, I understand there are countries like Japan where elevated rail lines were specifically created so that there would not be disturbance to normal lives of people living along the route.

But, there are instances within our own country where the needs of the ‘people along the way’ have been taken care of. The first one I can remember is the service roads which are provided alongside high speed expressways. The Chennai-Bangalore have quite a lot of them especially in small towns. Another example is of railways building footpaths beside rail-bridges allowing local villagers to use them rather than the rail-bridge to cross.

However, there are larger stories of exploitation prevalent in areas of our country whereby entire people groups are displaced for the purpose of bringing about development. Well, that is an entirely different story and a larger issue which has brought people groups into conflict.

Like the road blockade that was put on after the incident in front of the hospital, there are similar protests which only serves to bring the attention of the administration and community for a short duration. However, there are no long lasting solutions achieved nor attempted. Once the road blockade is over, everybody forgets about the root cause of similar accidents and nothing more is done. 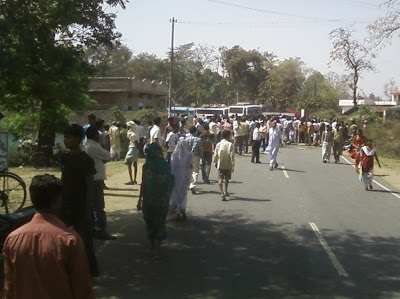 I’m sure there are interventions possible in development of public infrastructure whereby loss to life and resources can be brought down to a significant extent. If that happens, we can prevent more of such ghastly incidents from happening. However, this would require quite a lot of political will as well as community mobilisation . . .
Posted by Jeevan at 6:26 PM