Well, the reason for not having any posts regarding RSBY has been because we’ve been caught up with work and I was away for an important meeting. 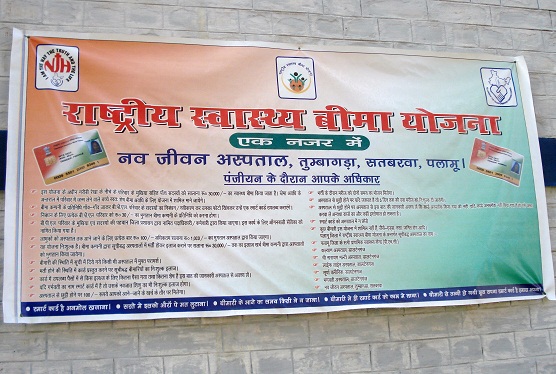 Since 5th March, 2012, when we officially rolled out RSBY at NJH, we’ve had quite a good crowd. The whole of last week we had about 800 OPD and about 40 deliveries. Of which, 75 OPD and 21 in-patients were treated under RSBY.
And our experiences have been varied.
1. The best part has been about patients who may have never thought about coming down for treatment readily coming for treatment. 2 girls with inguinal hernia – a rare occurrence in females came for surgeries. I’m sure that they would not have been brought for treatment if not for the RSBY Card. So, an example of emancipation of the girl child through the RSBY Card.
2. The food was well received by almost all patients. However, we had one episode where one of the patients had stolen the tiffin box in which food is given. However, we were able to trace out the culprit and ensure that it was returned.
3. There were couple of episodes where the Smart Card Holder wanted to take a Private Ward by paying the rest of the bill. I had quite a tough time denying the option. We have taken a decision to be quite strict in this matter as we are sure that this is going to be quite a very common demand.
4. One patient had gone off without thumb printing after discharge. She was from a nearby village and therefore we did not have much problem.
5. One potential problem we’ve recognised is that of patients coming with pre-term labour. The first one, we admitted as normal delivery, but later her pre-term pains subsided and then we discharged her after unblocking her from the normal delivery package. We put her on medical treatment but later realised that we get only the amount from the day we register her as medical treatment. Thereby we lose money. It also happens when we take couple of days to come to a diagnosis. And also, if there is a change in diagnosis.
6. The most unfortunate story was that one of our potential success stories decided to take a discharge against medical advice. It was a shame – but we had tried our best, but to no avail. For those of you who had been following this case, we found out that the lady did not actually have any lower limb weakness. Rather she was malingering – and there was something more to it.
7. And we’ve put notices all over the hospital regarding RSBY, so that no body will miss it. Unfortunately, after all the publicity we find patients who are totally unaware about the usefulness of the Smart Card.

8. There were also some hitches with the software. I’m not putting details here as it is quite intricate. However, we’ve had quite a good help from Mr. Maneesh, Eagle Software co-ordinator at Palamu District.
Posted by Jeevan at 6:43 PM