MD, aged about 30 years came yesterday morning with one of the most terrible bed sores I’ve ever seen. MD had been bed-ridden for the last 8 months after a bout of fever. To me, it looks like a case of transverse myelitis. Unfortunately, she developed bed sores over the last one month and there was nothing much the family did for her.
Then somebody told her about NJH and the ‘good treatment’ we offer. So, MD came to us. She had actually 3 sores. One on her back and two on the the flanks where the pelvis bone was in direct contact with the skin. 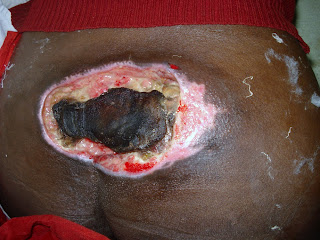 It was stinking. And the family was very poor. I’ve written a mail to the insurance company saying that this treatment would not fit into any of those mentioned. According to Dr Nandamani, she would need a thorough debridement (INR 5000), following by daily dressing for about a month (INR 500 X 30 = 15,000) and last of all, a skin graft (INR 8000 – FP00500243).
We’re yet to hear from the insurance company, but we’ve started the treatment and Dr Nandamani felt that it could be fatal if we waited and the patient goes into sepsis.
Another patient was yound RKS, who sustained scalding of his right hand 5 days back and needs a tangential excision and skin graft. However, the amount put in was too low for any sort of surgery. I ultimately put him in FP00500243 which would give us 8000 INR. In this patient too, we feel that the compensation is too low especially when you take into consideration the expertise involved. 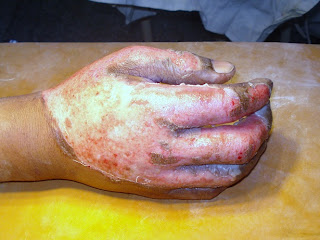 Both the patients had their surgeries today. We pray that both of them would recover fast.
Meanwhile, UD who had a dead baby and was our first  RSBY in-patient has got discharged.
We are yet to officially inaugurate RSBY services at NJH and we’ve not yet given much publicity to the fact that we have been empanelled. However, we had 15 patients in OPD and IPD together of which only 4 were valid cards. We had an unfortunate incident today which is a forewarning to all of us on how unpleasant can things turn out to be with programs such as the RSBY without the responsible involvement of the community . . . That would be my next blog . . .
Posted by Jeevan at 7:25 AM