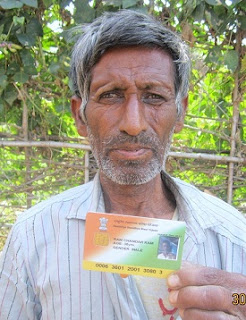 I thought of starting off a subsection of posts just for RSBY matters.
1. We had our first patient yesterday, a young lady into her first pregnancy who has ended up with an intrauterine death. She was admitted and delivered the dead baby sometime yesterday evening.
2. We also had 8 other patients who came with the card – but they all had problems. Almost all of them had not renewed their card. Rather it was an old card. They never saw the need to renew as there were only very few healthcare institutions where they had to do.
3. The next patient was one of our village volunteers who had to get his tooth removed. Nobody of us were quite sure if this procedure was included. But, it was. I was glad that he came to me in the office to check and I had the list where it was there. Since the first lady is not discharged yet, technically this elderly man was our first completed patient.
But, we had problems with the tooth extraction procedure. The item coded as FP00100009 was priced at 100 INR. Now, this was the amount we had to give for transport which meant that nothing would come to hospital. However, we decided to go ahead with registering him and the computer refused to take him in saying that the amount has to be 200 INR or above. And the program was refusing us to change the amount.
We called the phone numbers given to us and it was surprising that this was the first time somebody has actually done this procedure under RSBY – maybe in the whole of the country. And that’s the reason nobody thought of it. I’m not very sure if it is correct.
The person on the phone advised us to put the procedure as something else which would cost more than 200 INR and promptly do it off. So, we put the procedure as Flap Operation Per Tooth which cost 250 INR – 100 INR to the patient and 150 INR to the hospital and did it off.
Regarding this procedure – removing a tooth – the charges are quite less. In Ranchi, it costs about 350 INR and for us the actual costs would be about 200 INR. Therefore, the best price for this would be INR 250 which would mean that the RSBY Price should be 350 INR of which 100 INR should go to the patient.
4. Meanwhile, today I got hold of the full list about enrolment of BPL card holders into RSBY in Satbarwa region. Of the 10,000 odd eligible families, only 3500 odd has been registered. The strategy of not involving the care provider which was adopted by the Insurance Company, about which I had mentioned in my previous blog about RSBY, has obviously backfired. Now, from tomorrow, we are going to help out the Insurance Company and the Software Provider to do the enrolment. Let us see how it will turn out . . .
Posted by Jeevan at 9:38 AM