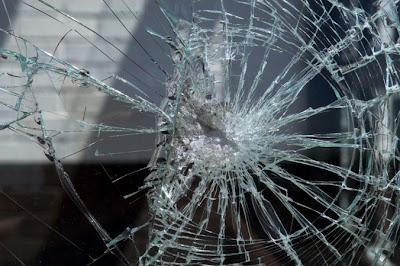 GP did not have any idea of what would happen to him on the 21st of May. He had been doing quite well over the last 2 months. More so, because the RSBY has enabled him to get cataract surgery done on his right eye.

But, GP's cow had other plans for the day.

While taking his cow back from pasture, the cow charged at him and the next thing he knew was that he has badly injured in his right eye. He had continued to wear his black glasses given after the the cataract surgery.

He was rushed to NJH and he reached us by 6 pm.

For Dr. Pradhan, our ophthalmologist, the first option was to refer to a higher centre in Ranchi. GP had a rupture globe, iris prolapse and blood in the anterior chamber - a nightmare for any doctor. The lens was just spared of any violence.

GP was poor. He had done his cataract because RSBY helped him. He could not afford the transport and stay at Ranchi. The family took the option to do the treatment here.

An extensive repair of the eyeball was done.

His present treatment is also being covered under RSBY.
Posted by Jeevan at 1:28 PM