Last week, as I travelled from Alleppey to Ranchi, few of my staff called me and told that there were very few buses available from Ranchi to come to NJH as it was 'lagan season'.

'Lagan season' is the season of marriage in this part of the country. The connotation is for the auspicious period when marriages can take place. The present marriage season has started from sometime during the second week of May and will extend to the last week of June. Someone told me that it could go all the way to the middle of July.

Why the great interest in the 'Lagan season' for NJH?

It's all about the hospital becoming busy. The patient numbers come down to a great extent during this season. The reasons . . . everybody is going to someone's wedding. There are no vehicles to come to hospital as most of them will be booked by marriage parties.

Soon after I arrived at NJH last Sunday, I had gone for a haircut. The barber and few of the customers were surprised at my decision to come back so soon after I had left for Kerala. One villager quipped, 'Sir, you should have taken a longer break. It's so hot and it's marriage season. There will be hardly any patients'.

But, we've not been so much derived of patients. There's quite a good number of patients coming to outpatient as well as inpatients. We've been busy.

Then, we receive patients who just want to get cured just in time for a wedding in the family. Basil is quite used to young men and women who want to have a perfect teeth just in time for the big day. I had a family whose middle aged mother was dying of tuberculous meningitis, who wanted me to keep the lady alive till a wedding in the family was over. But, then that never happened.

2 years back, I had a peculiar request. A father and his son who going to getting married in a couple of days came to Outpatient. The father wanted me to ensure that the son did not cough even once when the wedding ceremony was going on. He just wanted me to prescribe a cough syrup. And the son was totally asymptomatic.

I sometimes wonder how the concept of the 'Great Indian Wedding' has permeated to the rural areas of the country . . . when the whole world stops, when there is a wedding in the village.

Or was it always like this since the ancient days ? ? ? 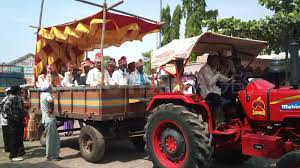