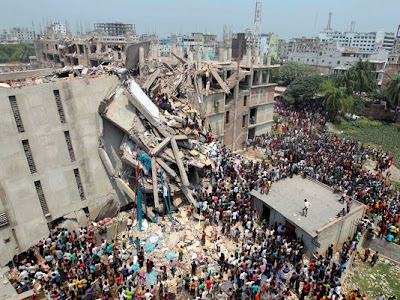 In addition to the news item about the drug company Ranbaxy paying fines in the US, another news item which may have missed many of our attention during the last fortnight would be the collapse of Rana Plaza garment factory in Bangladesh which left about 1100 death. The tragedy has been touted as the world's worst industrial accident after the Bhopal gas tragedy of 1984.

In addition to the dead, it is reported that almost the same number of people have been permanently maimed for life, having lost at least one limb. The snaps from the accident site are harrowing and numbing.

The shocking thing that came out after the disaster was the harrowing conditions and paltry compensations that the workers of such factories received. And the end products they churned out graced multinational garment stores in the developed countries.

And one can only imagine the huge profits that were being made by the middlemen who are involved in this sort of business. For the thousands of consumers who buy the garments made at this sort of factories, either they don't know about the background of the origin of their purchase or they're not bothered about that.

My fear is that the majority of us belong to the latter group.

I firmly believe that most of the so-called development in most regions of the world happen at the expense of the poor and marginalized.

Recently, I was exposed to this hard truth in two different ways.

The first instance was when we were exploring ways to promote some form of local industry in our region. One option we thought about was apparel making especially those with embroidery. I was shocked when I was told that we would not be able to compete with the low labour costs which was available in countries like Bangladesh.

The plot thickens as costs of production are much lower in countries where environmental and regulatory laws are lax which further decrease costs.

The second incident was a discussion with few colleagues on the costs of keeping domestic maids in our homes. The costs are quite prohibitive in states such as Kerala. Whereas costs are quite low when women/girls are brought from poorer parts of the country for the same purpose.

Which of course, has fueled the incidents of human trafficking in many parts of the country. The poor tribals of Jharkhand, where I serve, is a major victim of this social evil.

One can only imagine the furor that would have been created if the tragedy had occurred in the US or any other developing country.

Were not human beings created equal in the image of God? If that is true, it is imperative that we treat all fellow human beings as equal . . . which should transcend racial, religious, regional and national barriers.
Posted by Jeevan at 10:27 AM