I hope you had read about my previous blog about NV who was bitten by an unknown spider and later had a reaction which ultimately resulted in the dry gangrene of his entire subcutaneous tissue of the leg.
We had done quite an extensive work of grafting skin on the affected area and NV had ultimately gone back home. Unfortunately, we could not get another photograph of the healed leg.
Unfortunately, NV returned yesterday with severe itching of the leg with small crusts forming over the affected area. Dr Nandamani was initially perplexed as he could not find any other evidence of bacterial contamination of the skin grafts – and to his horror found out that the entire area has been infested with scabies. 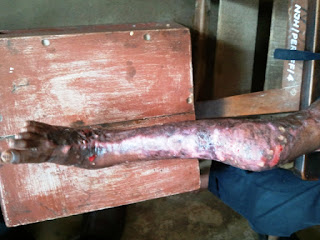 Scabies is quite a major problem in our part of the country. We have found quite a lot of our patients infested by the same. And unfortunately, many of our quack friends do not realize this condition and we find patients coming to OPD after having put steroid ointments and other condiments which flare up the infestation. Even among general practitioners we’ve found that scabies is fairly unrecognized and we’ve had even senior staff with the condition. One of my staff did not even acknowledge that she had the problem and I sent her to a dermatologist who confirmed the diagnosis.
We praise God that we could diagnose it quite fast and start the necessary treatment. Kindly remember NV in your prayers that the scabies infestation is easily controlled and the healing of his leg will be complete.
Posted by Jeevan at 10:00 PM