Near death experience of a young man with diarrhoea

DD, a 20 year old young man hailed from the nearby village. DD earns a living by selling off wood which he brings from the forest.
DD was suddenly taken sick yesterday afternoon, when he developed severe vomiting and loose stools. DD’s parents got hold of the local 'jhola chap' (travelling quack) who gave him a prescription of intravenous fluids, Injection Amikacin, Injection Dexamethasone along with some more medicines. I had managed to get hold of his prescription which is put here. 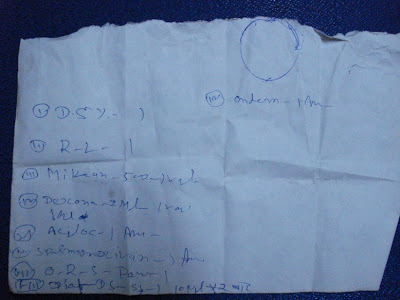 DD was brought to NJH at around midnight yesterday. He was very very sick. He had a thread pulse and we could not record his blood pressure. The symptoms were very much typical of cholera. Since it was midnight, we had to wait till day time for a ‘hanging drop test of stool’ for cholera bacteria.
Later I found out that DD had not put out any urine since yesterday morning. We put him on a catheter and there was hardly any urine.
DD responded quite well to intravenous fluids and Tablet Doxycycline. By morning, he had started to put out urine in small amounts. Although the frequency of passing stool had decreased, we managed to get a sample for the ‘Hanging Drop’ and it tested positive for cholera.
He had come to NJH on time. If he had waited some more time, we could have lost him. The management of the quack continues to be the same as that of what used to happen 20 years back. I wonder if we could train some of these quacks to provide life saving treatment.
Posted by Jeevan at 6:43 PM