We had a horrible beginning of a day today. After devotions, I found out that there was a little girl, AK aged just above 2 years who had come in with a history of fever for the last 10 days. I wondered what the family doing for that long time. Unfortunately, I did not have much time to take a detailed past history or socioeconomic history.
AK was very sick with labored breathing. She was so pale – that I knew that her hemoglobin would not be more than 2 gm%. Her saturation was about 70%. If she had to survive, she needed blood and mechanical ventilation.
Luckily for AK, the ventilator was free and we could hook her onto that soon. The problem was with the blood. I went along with the father of the child and ensured that he checked his blood group. It matched. He requested 10 minutes to go and have food as he had not had anything to eat since the last 12 hours. 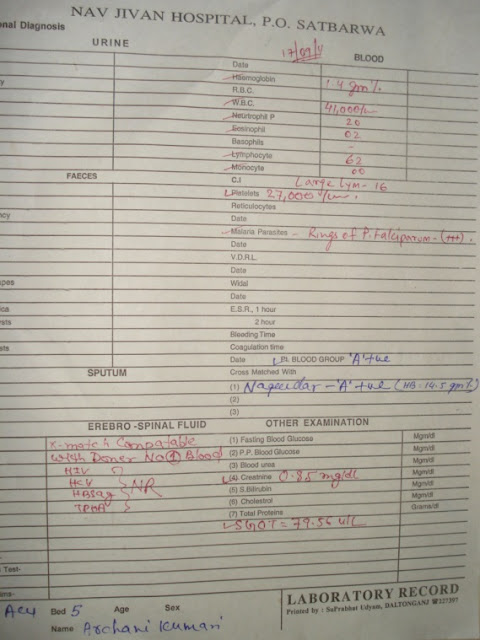 The laboratory results left me stunned. The father told me that she was on Injection Artesunate. You can see the laboratory results in the snap beside you. Later, Mr. Anil told me that 60% of the RBCs were filled with the malarial parasite.
She did not have much chance unless she had the blood. I went back to her bedside. She had suffered a cardiac arrest and the nurses were already starting a CPCR. The father who was supposed to be back could not be found. With a hemoglobin of 1.4 gm%, I knew that we did not have much of a chance.
The father came after about half an hour. Her heart had started to beat again. I had rushed fluid. As a last ditch effort, I started her on a dopamine drip – which was foolish considering her pathetic hemoglobin. She suffered another cardiac arrest after which we could not revive her.
She died at 10:00 AM exactly 2 hours after she had come in.
I’m concerned about 2 things.
The first one is about the injectable artesunate which was used. There can be only two things which can be concluded. Either it was a duplicate medicine or there is resistance emerging to artesunate compounds in our region. There are reasons to believe either of them, both of which are reasons of major concern to us.
Duplicate drugs are a major issue in most parts of the country.
However, there is much reason for us to believe about emergence of artesunate resistance as during the last 2 months; we have quite a lot of patients who had been started on artesunate derivatives from outside, especially the quacks as well as legitimate doctors. They had no relief and we have seen them respond to quinine.
My second concern was about the attitude of the father to the condition of the little girl. He could have at least tried. I’m not saying that the girl would have survived if we got the blood. He was least bothered when he came in first.
Neverthless, I saw him weeping silently after I told him that his daughter has died. But, if he had brought her in earlier she would have definitely survived.
After this little girl left, we had 2 more admissions in the Acute Care Unit of similar patients with a similar history. More about them in the next blog.
Posted by Jeevan at 10:09 PM