Tuberculosis - Are we winning the war?

The two X-Rays shown below are of two ladies – the one on the left is that a very young lady, MD with a 2 year old child and the one on the right is that of an elderly lady, LD with adult children. 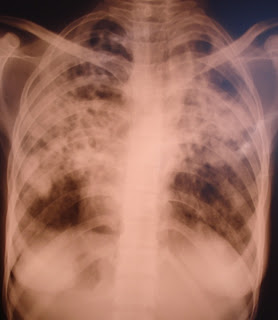 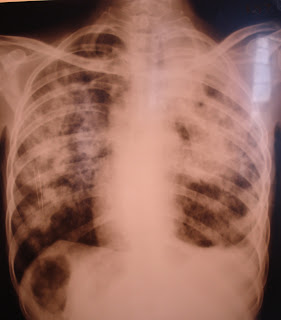 Both these ladies came in during the later hours of Saturday evening. They must have come in as the OPD was closing. It was very evident from both the histories that they have tuberculosis. The reason we took the X-rays was because I was unsure of how much healthy lung tissue they had left. I’ve already started them on anti-tubercular treatment without waiting for a sputum test as the sputum test will happen only on Monday morning.

The RNTCP higher-ups have been going gaga about the success that RNTCP (Revised National Tuberculosis Control Programme – www.tbcindia.org ) has achieved in bringing tuberculosis under control. RNTCP is a highly acclaimed programme run by the Government of India aimed at the control of tuberculosis in the country. Quite a lot of clinicians have many misgivings about the programme – but that is another story.

NJH has been partnering in implementing RNTCP since its inception – as a Microscopic Centre catering to a population of 100,000 since 2001 and as a Tuberculosis Unit since 2006.

I need to say this – we have been having an increase in the number of patients whom we are diagnosing tuberculosis over the last 2 weeks. Even as I write this (10:40 pm), I’ve a patient who’s just come in and it looks like tuberculosis. I’ve 4 patients in the inpatient wing waiting for sputum AFB tomorrow morning. We’ve had quite a number of patients over the last week who had been diagnosed as malaria or enteric fever outside and we came to a diagnosis of tuberculosis – and they’ve improved after Anti-tuberculosis treatment. Unfortunately, they include quite a number of children.

I’m not sure of the reason for the sudden increase in the number of tuberculosis suspects. One reason which I can think of is the drought situation which has been prevalent in the region for the last 3 years by which the poverty among the communities have worsened. This has been followed by very heavy rains over the last 3 months – which has increased the incidence of water and vector borne diseases.

Most probably what is happening is that the other diseases  like malaria, dengue, diarrhoeal diseases etc are occurring which is decreasing the already poor immunity of the impoverished population making them susceptible to flaring up of tuberculosis infections to which quite a lot of the population is exposed to.

The reason I suspect is because of a very peculiar history which we notice in many of the patients whom we ultimately diagnose to have tuberculosis. They come with a history of fever 2-3 weeks back following which they are treated at a quack’s place (http://jeevankuruvilla.blogspot.com/2011/08/quacks-rmps-registered-medical.html) usually with artemether or levofloxacin or a combination of both – following which they are asymptomatic for about a week after which they again get fever. Initially, it does not give the peculiar symptoms of tuberculosis – but over a week, they have the pattern of evening rise of temperature, loss of appetite etc. Unfortunately, many a time, we do not get a positive report on sputum – most probably because of unscrupulous use of Ciprofloxacin and Levofloxacin, both of which have anti-tuberculosis bacilli activity. We conclude based on typical X-Ray finding of apical consolidation and cavity formation. And of course – the best support - history of exposure to another case of tuberculosis.

I would definitely like to hear expert comments. Of course, I’m quite interested in the stories of KD and LD and will try to put them up in a later post. I’m sure this would be quite interesting especially from the perspective of the socio-cultural and economic set up of the region.
Posted by Jeevan at 11:02 PM