Last couple of days I was in Kolkota, this time along with Dinesh and Malay. The objective was to find out more about buying electrical accessories as well as some surgical items.
We left by bus from NJH two days back (Monday, 26th Sept) and reached Ranchi around 6 in the evening. After sending off Malay to the railway station along with the luggage we had, Dinesh and myself scoured Ranchi for shops selling electrical accessories. We found one after quite a long time. By the time, we got a quotation it was time for us to rush to the railway station.
As usual we had booked tickets by the Hatia-Howrah Express. All of us had uninterrupted sleep till the train pulled into Howrah at around 7:30 am. We were glad that it was not much late as it had been during the recent times.
But, we had a hard time in the pre-paid taxi stand. I’ve had previous experience of long queues in the pre-paid counter of terminal 2. And I had avoided getting out through terminal 2 of the Howrah station for quite a long time. Today, I was a bit hungrier than usual and thought of picking up something to eat before we left the station in the ‘Comesum’ joint.
It was a tragedy. By the time we came out, there was quite a long queue. We had to wait a good 90 minutes before we got a taxi. I have not been to many Indian cities, but the system in Howrah is certainly not one of the most encouraging one for travellers.
First of all, there are 2 systems working in tandem for hiring taxis. The first one is the pre-paid system and the second one is a system of directly getting taxis on hire. First of all, there a shortage in the number of taxis which are available – as most taxi drivers do not agree readily to come down to Howrah station from town – unless you agree to hire them well high above standard charges. When we had to return today from Burra Bazar to Howrah station, no taxi driver was ready to come without a minimum charge of at least Rs. 200 which was exhorbitant considering that the distance is not even a mile.
There was a tragic comedy of sorts in the taxi stand when one of the taxi drivers who came into the pre-paid counter found himself to have a flat tyre after having been allotted a passenger. It was terrible to find the pre-paid counter refusing to change the allotment of the hapless passenger to another taxi. Meanwhile the taxi driver made himself look like a clown trying to change the tire. First of all, he had a malfunctioning jack to lift the car while he changed the tire. 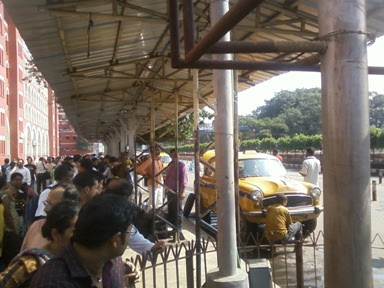 He tried to hoist the jack couple of times – and by the time he had the car hoisted up and started to remove the bolts, the jack gave way and he was back to square one. The third time, he got all the bolts out and then the jack gave way. It was getting a bit dangerous and he decided to give up.
He was also explaining to his passengers that he does not seem to succeed in doing much.
He went off trying to find another of his fellow taxi-drivers to arrange another jack. By that time, we had got our allotment of our taxi and was on our way to ‘Sceptre’ where we usually stay during our visits to Kolkota.
So, anybody visits Kolkota – advice from me. Even if you arrive at Terminal 2, try to get a taxi from Terminal 1 in the Howrah Railway Station.
Posted by Jeevan at 5:39 PM