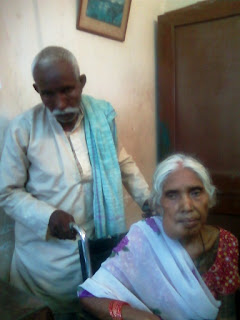 I told them that I’ll help them to obtain help in going. They sat down and talked for a long time. It seemed that their children were doing well. But, they had no time for the parents. I gave letters for them to give to the local government authorities so that they could request help.
Like the many malignancies which we have been seeing of late, most of these poor people have nowhere to go.
In between, we had a elderly lady with electrical burns. There was only about 10% of burns and most of it was quite deep. Since electrical burns could be quite deep such that it could involve even the bones, the patient was quite elderly and the family looked quite well off, I gave them the option of taking her to Ranchi which they promptly did.
By the time, we finished OPD it was 5:30 pm. As with each day, we had learnt quite a lot. There are concerns which I would share in my later posts especially about the prevalence of anemia which is responsible for quite a lot of morbidity and mortality in this part of the country.
I also realized that Dr Shishir, Dr Nandamani, Dr Angel and I had dealt with quite a number of sick patients whose management could have resulted in quite a number of complications and I acknowledge the grace of God in whatever we did during the day. My prayer is that our patients also realize the same in their lives.
Posted by Jeevan at 11:24 PM