Sex selection . . . A slap on the face for the doctors

When I was in Medical School, I remember one of my professors telling me that the greatest bane of the modern Indian society was the fact that healthcare, education and religion had become commercialised and profit oriented. Few years later, I had a very senior doctor commenting that after politicians, doctors are the most corrupt lot.

Today morning, I happened across this article, which if true, shows doctors in very poor light. 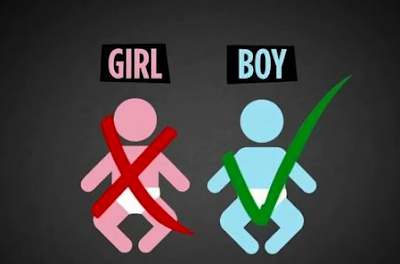 Gender determination in the unborn and their selective abortion is an evil which has taken the imagination of the average Indian. Sex ratios are going from bad to worse in most of our states.

And we see this quite often in our part of the country.

Couple of days back, we had a lady in the Labour Room in her third pregnancy. The anxious look on her face was enough to help our doctor to diagnose that her first two children were girls. When she delivered the baby, it was unnerving to see her groping the perineal area of the baby as soon as he was delivered. I could have imagined her grief if the baby was a girl.

Recently, I had a request to copy a very grotesque snap which accompanied a previous post.

However, that's quite a matter to have some amount of introspection among the healthcare fraternity . . .