Apologies for posting this late. We've had a very busy and exciting week.
The celebrations went off quite well. We thank the Lord for all the blessings we enjoyed during the week.
The programme on the first day was for the local community. We had invited the newly elected Panchayat Raj leaders, Sahiyas (ASHA), DOTS Providers and other community leaders. 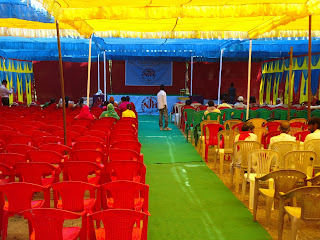 The chief guests were the Civil Surgeons of Palamu and Latehar. We had also invited the other healthcare officials. Unfortunately, due to unnavoidable reasons, none of the officials were able to make it to the function.
The best part of the programme was the torch relay started by Dr Pradhan and passed on to the present unit leadership who ultimately gave it to Dr Mark Kniss who lit up a fire cauldron symbolising the start of the function. 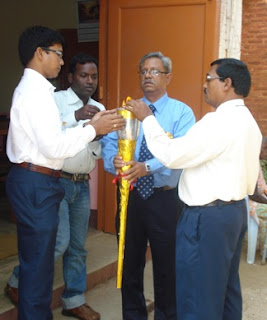 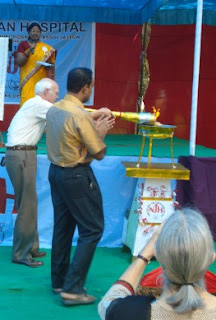 Following the ceremony of the torch lighting, I welcomed the audience as well as gave a brief report on the activities of the hospital.
The next part involved Dr Mark Kniss thanking all those in the local community who helped him with the efforts in starting Nav Jivan Hospital. One of the community leaders, Mr. Bhola Prasad represented the community in thanking Dr Mark Kniss for the efforts he took in establishing the hospital. 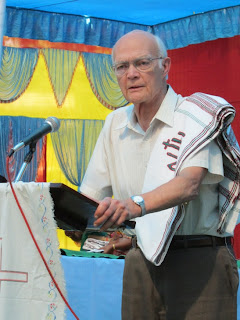 The meeting was well attended. We were quite glad that quite a number of the Panchayati Raj elected members, Sahiyaas and DOTS Providers attended the meeting. 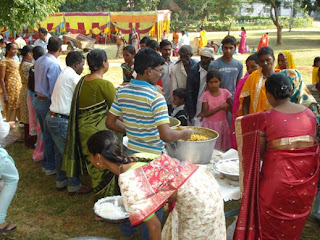 The meeting closed with prayers and was immediately followed by a sumptous lunch. A section of the audience along with the staff later proceeded to the ophthalmology department for the inauguration of the Non Touch Tonometer. More on that in the next post.
Posted by Jeevan at 9:45 AM