It all started yesterday with 2 sisters, both below 5 years coming to Emergency with quite high grade fever associated with chills and rigors. Both of them were grandchildren of one of our watchmen, Mr. Jithen. They were being managed in the village.
However, the parents or rather the grandparent realised that both of them need serious medications.
When they came in on Sunday morning, both of them were partly conscious, one of them had falciparum plenty within her red blood cells whereas the other one did not have obvious parasitemia. Both were terribly anemic with haemoglobins of half the normal values.
As I had written in my previous blogs, there has been quite a lot of malaria in this part of the country since the last month. Even, the local newspapers have been reporting increase in the number of deaths as well as large number of villages being terribly affected by the malady.
Both of them have been started on quinine and the relatives were able to arrange blood transfusion for both the children. They have improved quite well and should be fit enough for discharge in a couple of days. 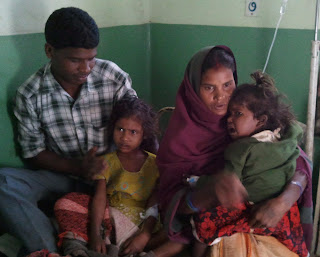 However, it is very evident that both these little girls are quite lucky compared to NS, a little boy who came with very severe anemia yesterday, about whom I shall write in my next post.
Posted by Jeevan at 8:06 AM