Doing Cesarian section in hospitals located in remote locations of developing nations used to be quite unpopular. Quite a lot of obstetric procedures developed in the good old days which were designed to prevent Cesarian sections.

I never understood the gravity of the problem of doing Cesarian sections in remote areas such as ours till an incident during my previous stinct at NJH during 2004-05.

I had gone to one of the remote villages as part of the community health outreach programme. After I reached quite a remote village, someone informed me that there was a woman in one of the houses who was having a delivery. Quite fresh from home in Kerala, where attempting a home delivery was unthinkable, I dreamt of myself being a messenger sent at the most appropriate time to help out this poor lady attempting a home delivery.

I rushed to the house where the delivery was taking place. Just as I reached, I realised that the baby was already out. I was not allowed into the house as it was quite filled with women of all ages and a very old woman came out with blood caked all over her hands and sari. She muttered something in Hindi and then there was a big cheer all around.

Hardly anybody was bothered about any of us standing around. Later, one of our lady staff volunteered to request one of the family members to have me look at the lady who delivered the baby. Quite fresh and brimming with enthusiasm, I was prepared to do a good postnatal examination. To my horror, the first thing I noticed was a long scar which run through the middle of her lower abdomen.

When I asked about the same, the husband happily informed me that the first baby was delivered by a Cesarian section. He also told me about the indication. She was taken to NJH as she developed seizures and had bloated up - most probably eclampsia. The baby was delivered alive but died soon after. It's been 2 years and for the present pregnancy, she has not even had a single ante-natal check up.

But for the family - the present pregnancy was a success. They had avoided a institutional delivery and had a healthy boy baby.

Unfortunately, the attitude towards Cesarian sections has not improved much. Over the last week, we had two pregnancies who had previous Cesarian sections, who came quite few days after the expected date of delivery.

The first one allowed us to do the Cesarian section as soon as she came in. When Dr. Nandamani opened the uterus, this was what he saw. 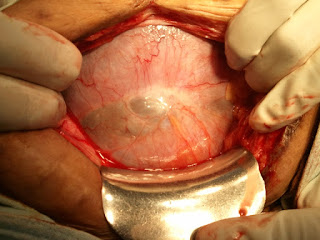 The second one was more horrible. The lady did not allow us to admit her the same day and came with much hesitation the next day. I was operating and Dr Nandamani had his video camera on.

In the olden times, procedures such as symphysiotomy and cervical incisions used to be quite commonly done. I wonder if any of the present trainees in the speciality of Obstetrics know much about them.


Both the women could have died - both near maternal misses. it was a miracle for both of them to be alive and more miraculous to have live healthy babies.


Talking of obsetetric procedures, another gruesome procedure is Craniotomy - which has also become not a common procedure in recent times.


Well, I hate doing craniotomies but almost ended up doing one couple of days back. More on that in the next blog...
Posted by Jeevan at 7:56 PM