I shall try to explain what happened through this snap . . . 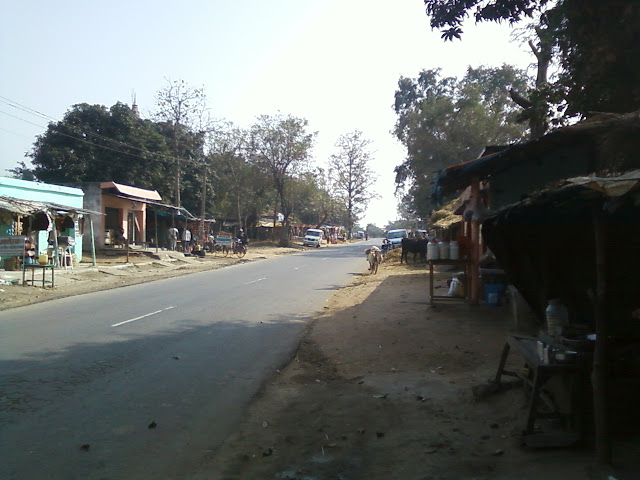 This is NH 75 towards Ranchi, in front of our hospital. Please note the cycle with sacks standing on the right side of the road. And please note a SUV parked farther away on the same side.

I was buying some fruit from the shop with the 3 white bottles on the same side of the road (nearer towards the camera) when this incident happened.

The man on the cycle (a very poor tribal man) was on his way to the Satbarwa market to sell his load of vegetables when the guys from the SUV stopped him. There were about 6-7 well off guys in the vehicle. They asked him if they could buy some of his vegetables. He told them that he was willing only if they will buy huge quantities and he quoted the price which was actually 2 rupees less than the market value.

They brought about 10 kilograms of cauliflower and about 8 kilograms of tomato. And one of the guys from the SUV gave the poor guy a 100 rupee note and told him that it should take care of everything.

The vegetable seller knew his mathematics. He was not willing to give up.

It was obvious that the cost was much much more.

In the snap, the vegetable seller had gone off to argue with the rest of the gang inside the SUV.

This is a common sight we see in our local markets. Well off guys and from a dominant caste doing business by force from the poor and lower castes.

Well, we see this in a higher scale in the power and mining projects especially in the poorer areas of India. One of my previous posts on a visit to a village nearby touched upon how bauxite companies were getting land leased on force from poor tribals. You can read another well written example in Orissa here.

My dear Indians . . . please don't do much research on how social unrest such as the Naxalite movement etc. crop up. The injustice we see here is enormous.

As I wrote in on my previous posts, the third mass movement we could perhaps see after the futile appearing movements against corruption and violence against women would be in relation to the unequal distribution of wealth and power in our country .. .. .. and more so on the basis of caste.

It may be a small incident which would not have found a post on my blog . . . I hope it would bring wisdom to at least few of my countrymen.