In addition to the routine and the high risk obstetric work at NJH, we had a very special patient today.

FD had been suffering the shame of a vesicovaginal fistula since the last 30 years. I suppose almost all of the surgeons who had been at NJH is very much aware of FD. She is from a neighbouring village.

For those who may not know, vesicovaginal fistula (VVF) is a communication between the urinary bladder and the birth canal that results because of a prolonged labour where the baby's head presses on the pelvis during child birth. It can also occur as part of malignancy infiltrating the bladder or birth canal and also in surgical procedures. 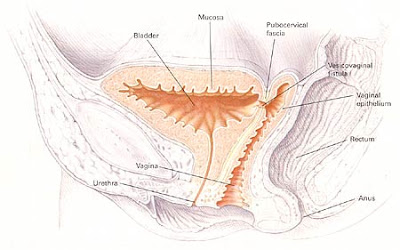 It is not that previous surgeons at attempted have attempted to do the surgery.

The challenge was that FD's husband was not much interested in her welfare and about getting the surgery done.

FD's husband died in the severe cold wave which hit us few weeks back. And then, she decided that it's time for her to attempt her surgery.

She had carried her shame for too long.

It was surprising .. .. .. The family already had a RSBY card and still, the husband had not bothered to get the surgery done. The husband's death had actually 'empowered' her to go ahead with the surgery. She was the decision maker now . . .

We request prayers for her quick recovery and the healing of the wound. It's not going to be easy. All odd's are against her . . . We pray and hope for the best for FD . . .
Posted by Jeevan at 10:37 PM